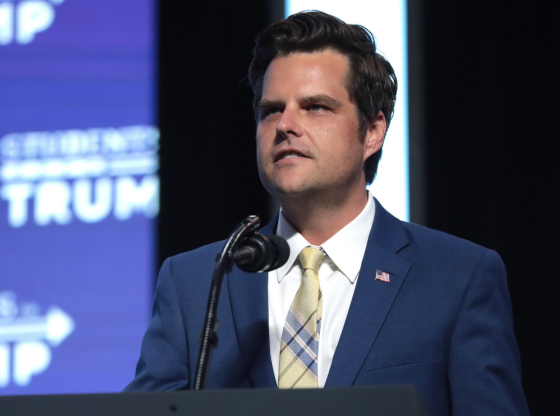 A new report regarding the ongoing scandal surrounding Rep. Matt Gaetz, which so far has involved allegations of involvement in sex trafficking and sex with a minor as well as a counter-accusation by Gaetz alleging that he and his family are being extorted has now gotten even stranger.

According to The New York Times, the Department of Justice probe against Gaetz now also involves verified cash payments Gaetz sent via Cashapp which the women involved claim was in exchange for sex.

The Times reported Thursday that the Department of Justice (DOJ) probe into Gaetz also involves former Seminole County, Fla., tax collector Joel Greenberg, who allegedly met women online on websites for dates in exchange for gifts and travel. Greenberg allegedly introduced the women to Gaetz, people familiar with the matter told the Times.

Messages and interviews indicate Greenberg and Gaetz directed the women to meet them at specific times and locations and laid out the amount of money for which they would be compensated. People familiar with the matter told the Times that the illegal drug ecstasy would at times be consumed.

Receipts on mobile payment apps reviewed by the Times showed money from Gaetz and Greenberg being sent to one of the women, who told friends it was for having sex with both men. A person interviewed by the Times said the men would sometimes use hotel ATMs to pay in cash.

Gaetz did not respond to requests for comment by The Hill on Thursday.

Will Gaetz survive these stunning accusations? Let us know what you think in the comments below.

Hope it is not true; I really like him, and he is one of the true Republicans in Congress.

So do I really like him – He is a true American Patriot – That’s why he is being attacked so ‘viciously’ – Pray for him to rise to Victory!

It is strange DOJ is so prompt in investigating a successful Republican. What has happened about ERIC SWALWELL sleeping with a CHINESE SPY & having a CHINESE INTERN in his office, is the DOJ also sleeping about this national security SCANDAL? Why has FBI been SITTING on HUNTER BIDEN’s Laptop and JOE BIDEN’s threat to UKRAINE – proof in a live video?? has FBI also sleeping about this? Hey DOJ & FBI go back to sleep.

Hunter asked the Chinese government for a little girl. They gave him a 9 year old girl and he raped her – even though she was said to be screaming. Gaetz is single and obviously felt the need to be discreet. Doesn’t bother me one bit.

That’s exactly right! Is this a smoke screen to make us forget about all those things? That’s the liberal demonRats thing to do!!!

Don’t forget the Chinese chauffer spy who drove Feinstein for 20 years or the Pakistani IT folks who stole computers from Democrats in the House and had access to top secret info on computers of at least 20 of them!

A Seeker
Reply to  teresa

As they say: “Birds of the same feathears flucking together!” China will someday rules the world by our HLEP through the hands of the Bidens! We will live to regret it! Their focus is to destroy the USA first! Unify the rest of the world through their gifts to fulfill the needs of those countries! We, the Amerians, we are no longer as united as we were: “ONE NATINONUNDER GOD! INDIVISIBLE, with Liberty and Justice for all!” Are we under “GOD”? We are making ANTI GOD LAWS! 1. Birth Control without following the Guidelines of the Church ~~ Satanism! 2. Abortion = Satanic Human sacrifice! 3. Same Gender sexual union = Satanism. 4. Euthanasia: Satanic Self Sacrifice!

Hell is a place for Evii Doers! Where GOD is ABSENT there is darkness withoiut end and Mortal Sins of all forms! s Where SATAN is KING, there MORTAL SINS RULE! ! The Light of God never enters HELL! No darkness of any form could enters HEAVEN! ‘Where GOD is, there is no darkness, non at all!”

Swallwell is a scandal involving facts like Hunter Biden’ s laptop facts can be buried,
Whereas FBI Fabrication like the Russian Collusion fraud…such falsifications have a life of their own …it is after all why the DOJ/FBI set up Gaetz to release his version to Carlson before they finalized their own fabrication to ensure there was no overlap to anything Gaetz already said – making Gaetz look like a complete liar as they tried to do to Donald Trump on Russia.
At ths juncture after the past 12 years one has to ask – why did the Gaetz family trust the FBI???

You are so right!

A Seeker
Reply to  Georgia Stafford

Yes! Pray for our be loved USA! Jewdea-Christianity is our ROOT! We are: ” One NATION under GOD! Indivisible! With Liberty and Justice for all!” Let us live up to OUR Pledge! We are UNDER GOD! NOT what is ANTI GOD! What is anti GOD is PRO-SATA! The Anti Life Laws are PRO_SATAN LAWS! Laws that our Legislators have made are pro-SATAN~~ 1. Birth Contro l= Satanism ~~ seeking pleusre along, without the RESPONSIBILITY for the FRUIT of that PLEASURE! 2. Abortion = Saatanaic Human Sacrifice! 3. Sane Gender sexual union = Satanism! 4. Euthanasia = Self Satanic Sacrifice!

Funny, if you demean women and just demand sex at the workplace (i.e. Biden & Cuomo), you can get away with it. But if you pay for it, somehow it is a big crime. Isn’t that supporting a small business?

Liberals have been howling about legalized prostitution for decades. Now, they want to crucify a Republican over allegations of it.

Good one! Ha! He should have just dipped into Congress’s Hush Slush Fund worth millions, thanks to taxpayers. Its especially set up to pay off Congress’s scandals ., mostly sexual in nature.

I think this is a witch hunt because he is actually doing good and the Demorats dont like it!!!

Well, I’ll wait for the investigation to come to a close before I make up my mind. But hes a 1/2 RINO that wasn’t 100% behind Trump.

Navarro was the only Trump person behind trump100%

We got screwed
Reply to  Terry

Lol Trump had how many votes snd who had to cheat to win?
The entire world knows except the lost sheep.
Have election investigators from Montana go down to shit show in Georgia, maybe they can get in on some of the food served in election lines in Georgia lol crooks and liars