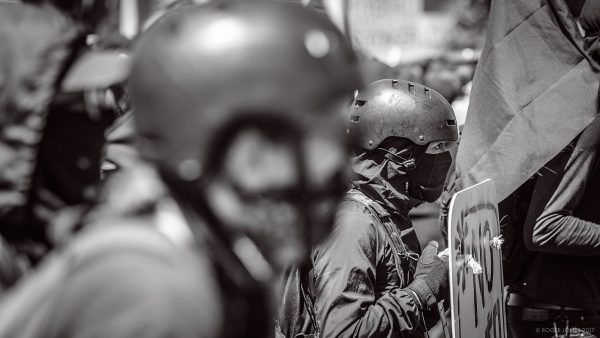 The sight of a black man supporting President Donald Trump sent a liberal mob into a frothing rage, with one black-clad militant punching him in the face and knocking out his teeth.

A video posted to the Twitter account of black Trump supporter Philip Anderson shows him and a friend peacefully trying to walk down a San Francisco street as an almost entirely white liberal mob stalked and taunted him.

Masked violent far-left militants attack conservatives at a small San Francisco gathering yesterday against Big Tech. Philip Anderson (@TeamSaveAmerica) had his teeth knocked out in an unprovoked punch to the mouth. pic.twitter.com/8lX6bLepFd

Anderson was attempting to hold a pro-Trump “Team Save America” rally when the howling white liberal mob pounced on him.

Seconds into the video, a white man hiding behind a black Antifa mask runs directly into Anderson, blindsiding him and punching him straight in the mouth.

As Anderson struggles to remain on his feet and cups his badly-injured face, a white liberal woman immediately begins screeching and taunting him.

The masked white liberal, ran at Anderson again, continuing to punch him.

“Get the f—k out!,” the white liberal crowd screamed at the black man in a moment right out of a Klan rally.

Anderson and his friend were able to get over a metal barrier to safety. Police officers rushed to hold back the liberal mob as they then tried to throw rocks at Anderson, much like racist mobs did to blacks in the 1960s. The video, recorded by a reporter in the mob, ends with someone waving an Antifa flag.

The liberal assault knocked out two of Anderson’s front teeth, sending him to the hospital.

A police officer was also injured. Another Trump supporter had his leg broken by unhinged liberals in a separate assault.

“I’ve a question for you, Joe Biden: you said that Antifa is ‘just an idea,'” said Anderson in a video recorded from his hospital bed.

“This is what the ‘idea’ you’re talking about, Antifa, did to me,” said Anderson, holding up one of his blood-drenched teeth. “I’m at the hospital right now, Joe Biden, because of Antifa.

Under Pressure, Joe Biden Repeatedly Defends Hunter
Everything You Missed From the Last Presidential Debate

Is this the clan going after that black man?

This is but a snap shot of the Democratic Party at work. Lets be realistic and honest for a change, when was the last time you saw someone other than a crazed Democratic Liberal with so much rage and hate. Can’t think of any other Political Party can you, proves my point. November 3rd is the day we stop them, keep the Presidency and Senate and regain the House if we’re to put an end to the Democratic Party’s insane ideas of how to run our Country.

Absolutely, BUT, we have to be Prepared for a terrible backlash from the left when President Trump wins !!! It is gonna make all these recent riots look like a child’s birthday party compared to what’s coming. So Patriots, get ready brothers cause it’s fixin to get terminal FAST !!!!

s It may lead to another Civil War in our Country and if that is the case we should all be prepared to rid our Country of all the Liberal socialist once and for all. We all should BOYCOTT the Liberal News Media which is the Instigator of all the Unrest we now see in our Country. The rule of Law is slipping away and that will lead to Chaos like we have never seen before. Usually when we elect a President He or she will run for 4 years and then either get re-elected or replaced as President. As bad as Obama and Biden were they were not attacked like President Trump has been for the last 4 years in office. Also we ought to seek a way for us to demand that any elected Official of any Party has to put in a full days work with the other elected Officials to settle out their differences in their attempt to run our Country for the Citizens of America and not for their Political or Financial Gain. Pelosi has rejected every attempt that President Trump has made for a Stimulus Deal even when she was offered more than she wanted. It all hangs on to the Democrats wanting to get Democratic states out of Financials problems they caused their Blue states to go through. They didn’t stop the Rioting and looting causing many small businesses to get totally ruined by these criminals day after day. It should have been stopped by the Democratic Mayors and Governors of these states. Their Failure not President Trump. Further I think President Trump has mentioned some excess money sitting in the Government that he should use for a stimulus package without the Democratic Run Congresses help.

the KKK was always liberal democrats

The Dems are the Klan…always have been and always will be…from the 1800’s through 2020…The DNC hasn’t changed…they are still remiscent of the Klu Klux Klan.

These are Pelosi and Waters hit men with Schumer’s blessing.

Yes, it doesn’t matter that he’s Black, because BLM is not about race, it’s about tearing down America and it will destroy its “enemies” of any race.

It appears there may be an uprising revolution in America. People are tired of BLM, Antifa and other violent gangs.

So true. If Biden is elected the US will no longer be a Constitutional Republic it will be Democratic Socialists of America. No freedoms dependent on the government. Why would anyone want this for America?

And Instagram blocks his account for him telling the truth and showing what happened . Its time too put this scum in their place ,prison.

I noticed the police didn’t do anything to the Antifa hoods that were assaulting the Trump supporters. Why do the liberals get away with violence ?

The only language these democratic liberal hit men/women understand is a laser in the eyes or a bullet in the “Joe Biden” leg. The police won’t do a thing but if the people organize with weapons and hold a rally and push back, these ANTIFA AND BLM thugs will take off like a scalded dog across burning rocks.

Time to go armed, in groups & then wear MAGA or face more of same
Arm up CCW

Our military personnel took an oath to defend the Constitution and to protect the country from all enemies, foreign and domestic. These leftist groups have declared was on democracy. Why haven’t they been stopped? Do we need another civil war to put them down? They bravely fight those who can’t defend themselves. They would not stand a chance against a well-armed group of true Americans who can defend themselves.

It is time to bring in the military forces.

The Feds and our Pres has to be asked FIRST!