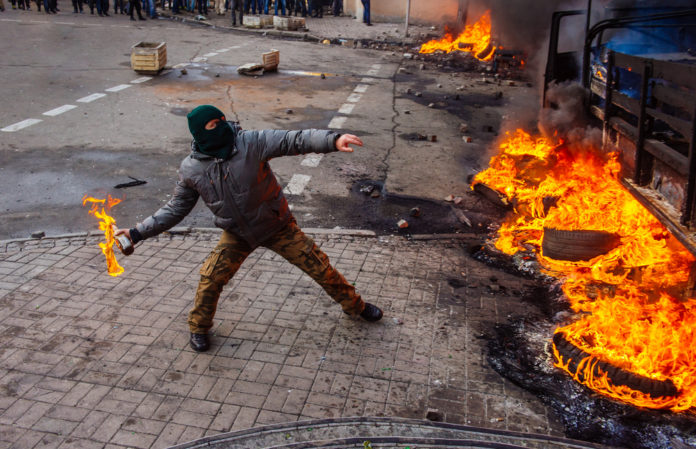 Antifa radicals reportedly targeted and vandalized the home of Madison Cawthorn, the 25-year-old Republican nominee for Congress in North Carolina whose inspiring story earned him a speaking slot at the 2020 Republican National Convention.

“I was waking up to go take engagement photos with my fiance, which I was very excited about, and then I wake up to these vandals, these little punks on my driveway,” Cawthorn told “Fox & Friends.” “They were gluing some of my signs to the driveway, they were spray painting pretty not so subtle threats on to them, and then they were cutting the head and neck out of out my signs all over the district.”

Cawthorn’s Democrat opponent, who’s earned headlines of his own for his unstable temper and violent threats, used the attack to go after Cawthorne.

“I have no reason to believe that the actions reported last week had anything to do with my campaign or my supporters. Mr. Cawthorn has incessantly hyped a tweet of mine from over a year ago to stoke anger within his supporters and create a false narrative of lawlessness in Western North Carolina. His ads aren’t directed at my supporters,” said Democrat nominee Moe Davis.

The tweet to which Davis refers is one from 2019 in which he urged his followers to begin playing dirty and even assaulting Republicans. Even though he is running for Congress, Davis has blocked most people from seeing his Twitter account to hide his violent and unstable rants.

“Screw they go low, we go high bullsh*t. When @NCGOP extremists go low, we stomp their scrawny pasty necks with our heels and once you hear the sound of a crisp snap you grind your heel hard and twist it slowly side to side for good measure. He needs to know who whupped his ass,” Davis tweeted in 2019.

The notoriously unstable Davis then claimed the vandalism was a conspiracy, and he was the victim.

“Vandalizing signs does nothing to aid my campaign. But it does allow Mr. Cawthorn to play the victim and lash out at me for attacking him without a shred of evidence that I had anything at all to do with what was reported. Indeed, he should await an investigation by law enforcement before making accusations,” Davis bizarrely claimed.

“Cawthorn, who would be the youngest sitting member of Congress if elected in November, shot to national prominence after defeating Lynda Bennett in the Republican primary,” the Washington Examiner reports. “Bennett had been endorsed by President Trump and White House Chief of Staff Mark Meadows. Meadows had previously served in Congress in the solidly red district that Cawthorn is hoping to win.”

Are Social Media Giants Helping Biden Win the Election? [TAKE OUR POLL]
Sign the Petition To Push for the Removal of Speaker Pelosi

Dems know no bounds. Their hate of America and normal Americans is seen every day in the face of their supporters.

And this what liberal education gets away with these days. And sadly there is no one to answer for the lack of true education.

And the beat goes on. Nothing new here. Criminal leftists!

Oh yeah attack a disabled veteran. Thank God he didn’t have to get up and run due to being permanently in a wheelchair.

Don’t know how to fix my comment and didn’t read the whole article. Sadly he was at his home.

The Devil is busy all over America, since God was removed from the Schools, Abortion was made legal. The Democrats and RINOS, have chosen their Master and it isn’t GOD.

And young Americans don’t remember what it was like when we did have prayer and a moment of silence at the beginning of each school day. So they’re good with the chaos of today….and espouse political views that only guarantee even MORE chaos for tomorrow.
Sad!!!
Thank God I’ve got maybe another 20 years and then I’m outta here!!!!!!!!!

Yeah Eliot. I’m 75 and hope I don’t live to 100 like my grandmother did. I can’t imagine 25 more years of this awfulness.