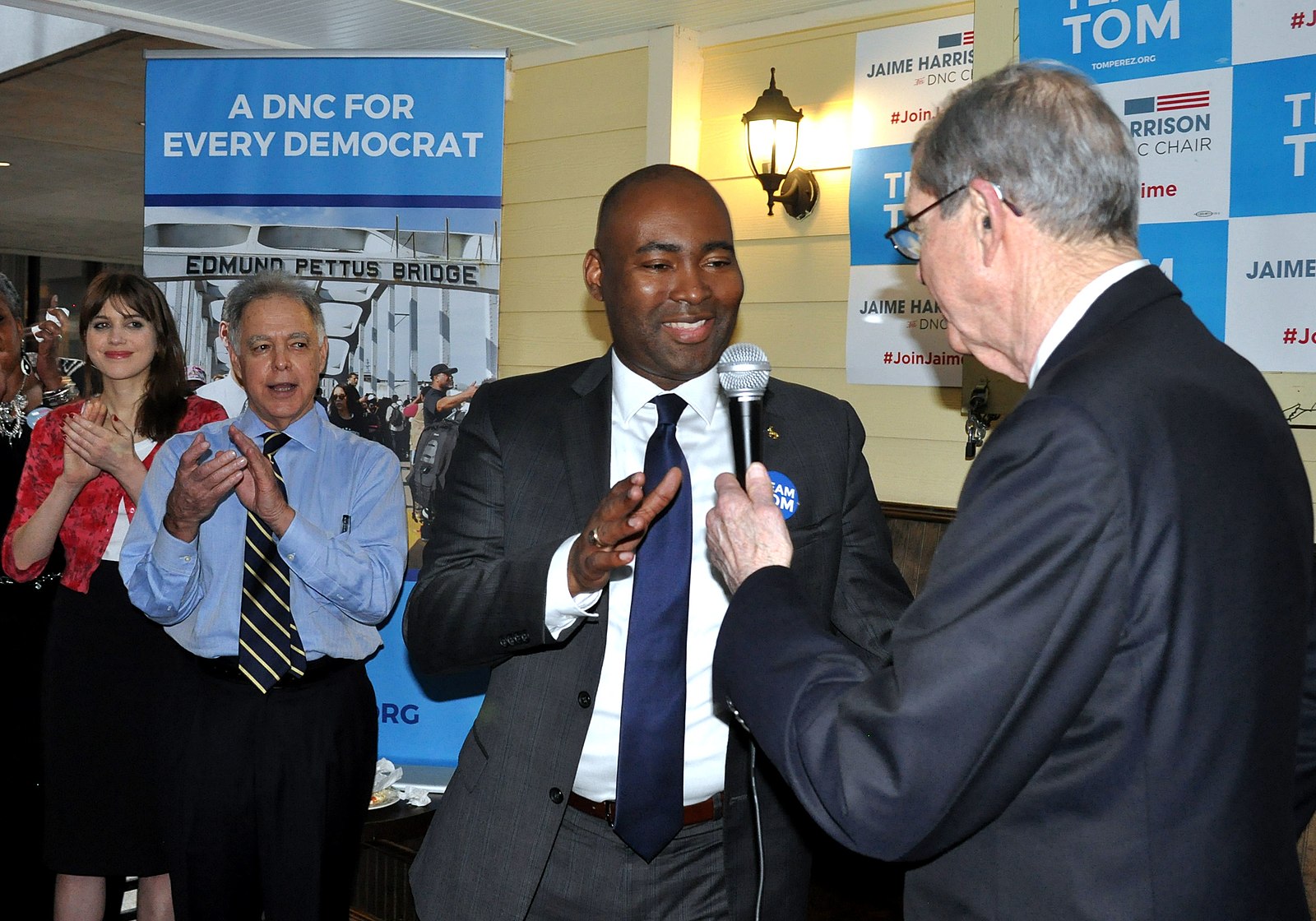 Democrats running in conservative states and districts habitually refer to themselves as moderates. It’s a tried and true tactic.

Unfortunately for Jamie Harrison — who’s giving Sen. Lindsey Graham the biggest scare of his political life — his mask of reason has been lifted to reveal his candid opinion on Supreme Court nominee Amy Coney Barrett.

In a display of hyperbole that would make Speaker Pelosi blush, Harrison claimed a Barrett confirmation would lead to decisions as infamous as Plessy v. Ferguson, where the Court in 1896 upheld the “separate but equal” legal doctrine used for racial segregation.

“I don’t look good in chains so I’m not going back to that” pic.twitter.com/XAol7Iw6r6

but then the mask slips with lines like this.

And people remember that he was a Podesta lobbyist and lifetime far-left activist. Running in South Carolina. https://t.co/S8qp7hQtnd

This is absurd on its face — she has 2 adopted children of color! But, whatever….

Her babies skin color should have NOTHING to do with anything. Her understanding of Constitutional law is all that should matter.

Do you question her understanding of Constitutional law?

Somebody just needs to piss all over these no good demorats. All of them immoral and hypicrites

If you want to destroy this country and your FREEDOM go right ahead and vote for these
low lifes. It is a time to TRY and unite this
country and you have pure scum like both
Obama’s trying to divide this country..along
with AOC..Tjaib..Pressley and Omar..
I personally love my country and feel that I am
no better than anyone based on my skin color.
You have seen what DemonRATS do to cities..
don’t allow the entire country to be destroyed.
Whether you like or hate President Trump..what
has he done to warrant the traitorous treatment
he has received.
Obama and Biden along with Hillary..the FBI
.and the CIA..tried to destroy our President..
before he even took office..
The Deep State does exist and with your help
and votes it can finally come to an end.
SUPPORT PRESIDENT TRUMP..YOUR FREEDOM
DEPENDS ON IT….
BIDEN IS A TRAITOR..ALONG WITH OBAMA.
BIDEN IS A PUPPET AND SOROS AND OBAMA
ARE THE PUPPETMASTERS.

I want someone out here to show me HOW an “anchor baby”, born to TWO FOREIGN parents can becone a candidate for VP of the U.S. Apparently (just like with FRAUD obama). the U.S Constitution will AGAIN be ignored, because the “candidate” happens to have a “D” after her name.

Bob's Your Uncle
Reply to  cliff

Easy! All you have to do is be a lying foreigner who lies to the easily fooled no-nothings and you are a cinch to win the Presidency. (see Obola)

TO TAKE THIS ONE STEP FURTHER HOW ABOUT ILHAM OMARS CONGRESSIONAL SEAT BEING AN ILLEGITIMATE IMMIGRANT WHO GOT INTO OUR COUNTRY ON LIES. SHE MARRIED HER OWN BROTHER TO BE ALLOWED ENTRY INTO THE USA. SHE PAYS HER HUSBAND ALMOST $1,000,000 FOR CONSULTANTS FEES. SHE OPENLY DETEST JEWISH PEOPLE AND WILL EVENTUALLY LIKE TO INSTILL SHARIA LAW INTO OUR NOT LONG TO BE CONSTITUTION. I ALSO THINK THAT AG BARR AND JOHN DURHAM SHOULD RELEASE THE NAMES OF ALL THE FEDERAL EMPLOYEES AND POLITICIANS INVOLVED IN THE FAKE RUSSIAN COLLUSION ATTEMPTED BY THE DNC AND HILLARY AND BIDEN WANTING TO INVOKE THE LOGAN ACT AGAINST GENERAL MICHAEL FLYNN A 33 YEAR DEDICATED U.S. MILTARY MAN TO TRY AND BRING DOWN PRESIDENT TRUMP. OBAMA, BIDEN, CLAPPER, BRENNAN, SUSAN RICE, LORETTA LYNCH, JAMES COMEY, LISA PAGE, PETER STROZK, MUELLER AND ALL HIS DEMOCRATIC SUPPORTERS ON HIS TEAM BIASLY INVESTIGATING PRESIDENT TRUMP AND HIS CAMPAIN BEFORE, DURING AND AFTER HIS DULY ELECTED POSITION OF PRESIDENT OF THE UNITED STATES. IF ALL OF THESE NAMED INDIVIDUALS ARE NOT PROSECUTED THEN WE DEFINITELY ARE A COUNTRY WITHOUT THE RULE OF LAW FOR ALL OUR CITIZENS, POLITICAL OR NON-POLITICAL. HILARY CLINTON IS ONE THAT I ALMOST FORGOT ABOUT. THEY ALLNEED TO BE PROSECUTED TO THE FULLEST EXTENT OF THE LAW, IF WE WANT TO BELIEVE IN OUR COUNTRY’SFREEDOMS AND LIBERTY’S. IF NOT I WANT TO KNOW IN ADVANCE OF WHAT THE LOOP HOLES ARE FOR ME AS A REGULAR CITIZEN TO COMMIT A FELONY AND NOT WORRY ABOUT BEING PROSECUTED BY OUR JUSTICE DEPARTMENT AS SOME PEOPLE HAVE A FREE GET OUT OF JAIL PASS. WE ALL SHOULD HAVE ONE OF THOSE ALSO IF THE JUSTICE DEPARTMENT DOESN’T USE THE RULE OF LAW TO PROSECUTE THESE OFFENDERS.

When the Party of the Mob or the Majority Rules has no regard for a Constitutional Republic or Rule of Law, AND NO ONE ENFORCES IT, these are the results.

Think about this:
Joe Biden is elected.
Three weeks later, the Democrats under Nancy Pelosi “discover” that Biden is incapacitated by dementia, and invoke the 25th amendment and remove him from office.
They then attempt to install Harris as President but Nancy Pelosi ‘Discovers” that Harris in not eligible to hold that office because neither of her parents were citizens of the US when Kamala was born here.
There has not been enough time to appoint a VP.

That conveniently means that the Speaker of the House is the next in line to the Presidency.

Half the country commits suicide, and the other half prepare for war.
.