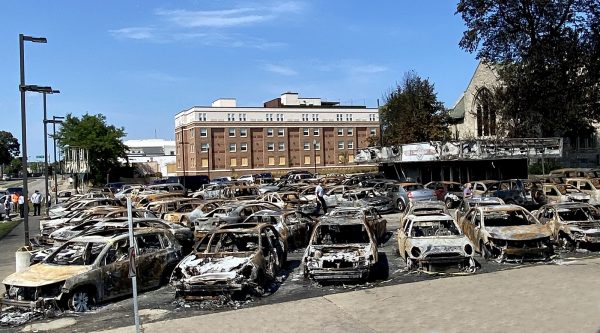 It’s time for Joe Biden to retract his statements defaming 17-year-old Kyle Rittenhouse, calling him a “white supremacist.” Rittenhouse made headlines after he allegedly shot and killed two individuals during the riots in Kenosha, Wisconsin following the Jacob Blake shooting.

The boy can be seen running from mobs in Kenosha before stumbling and hitting the ground. He was then quickly surrounded and acted in self-defense firing his weapon. Rittenhouse is now facing multiple charges, the most severe being first-degree intentional homicide and Rittenhouse would face life in prison if convicted.


In a new campaign ad released from Biden, Rittenhouse is pictured while Chris Wallace talks about the violence seen in Kenosha calling him a “white supremacist.”

There’s no other way to put it: the President of the United States refused to disavow white supremacists on the debate stage last night. pic.twitter.com/Q3VZTW1vUV

One of Rittenhouse’s lawyers, Marina Medvin released the following statement:

“There is absolutely no evidence, not even a pinch, of this defamatory accusation that my client Kyle Rittenhouse is a “white supremacist”- none. My client is a 17 year old patriotic, dutiful American boy who came to “help people,” that’s in his own words. These words are enshrined in videos that have been shared all over social media from that night in Kenosha.

Kyle came to Kenosha with his medic kit to help rioters who are injured. He talks about this is these videos. “If anyone is getting injured, I’m running into harm’s way,” he says. There are videos of him screaming to the crowd, “if you are injured, come to me.

There is  no evidence of him being a “white supremacist.” This dangerous storyline was concocted by online trolls and then parroted by mindless politicians and pundits. The flagrant defamation needs to stop. They can retract and apologize, or they can deal with Lin Wood in court. It’s their choice.

As for criminal charges, I am not going to address the issue of self defense before trial. What I will say is this- there are countless lies being spread about Kyle Rittenhouse-lies about him crossing state lines into Wisconsin with a rifle and lies about him coming to Kenosha to shoot people- and these are absolutely false. The lies and propaganda need to stop.”

Response to Joe Biden's defamatory allegation that my client Kyle Rittenhouse is a "white supremacist" — pic.twitter.com/m2QUJ25rAt

However, it seems the legal team has already made their decision and intends to sue Joe Biden and Kamala Harris for libel.

On behalf of Kyle Rittenhouse, I shall sue @JoeBiden & Biden/Harris Campaign for libel.

I am partisan in 20/20 supporting @realDonaldTrump.

I am non-partisan trial lawyer who aggressively pursues truth to achieve justice.

Put in your hearing aid, Joe. You will hear footsteps.

Hope their suit is successful and some of those millions the Biden family has reaped from his political offices is given to Rittenhouse.

If Harris is elected, the suit will go nowhere.

That’s why we have to make sure the Biden/Harris aka Harris/Biden ticket never gets in the WH!!

File that lawsuit as quickly as possible…..it’s about time Biden has to pay out some of the money he and his crooked son, Hunter, got for doing nothing but .help foreign countries instead of America…