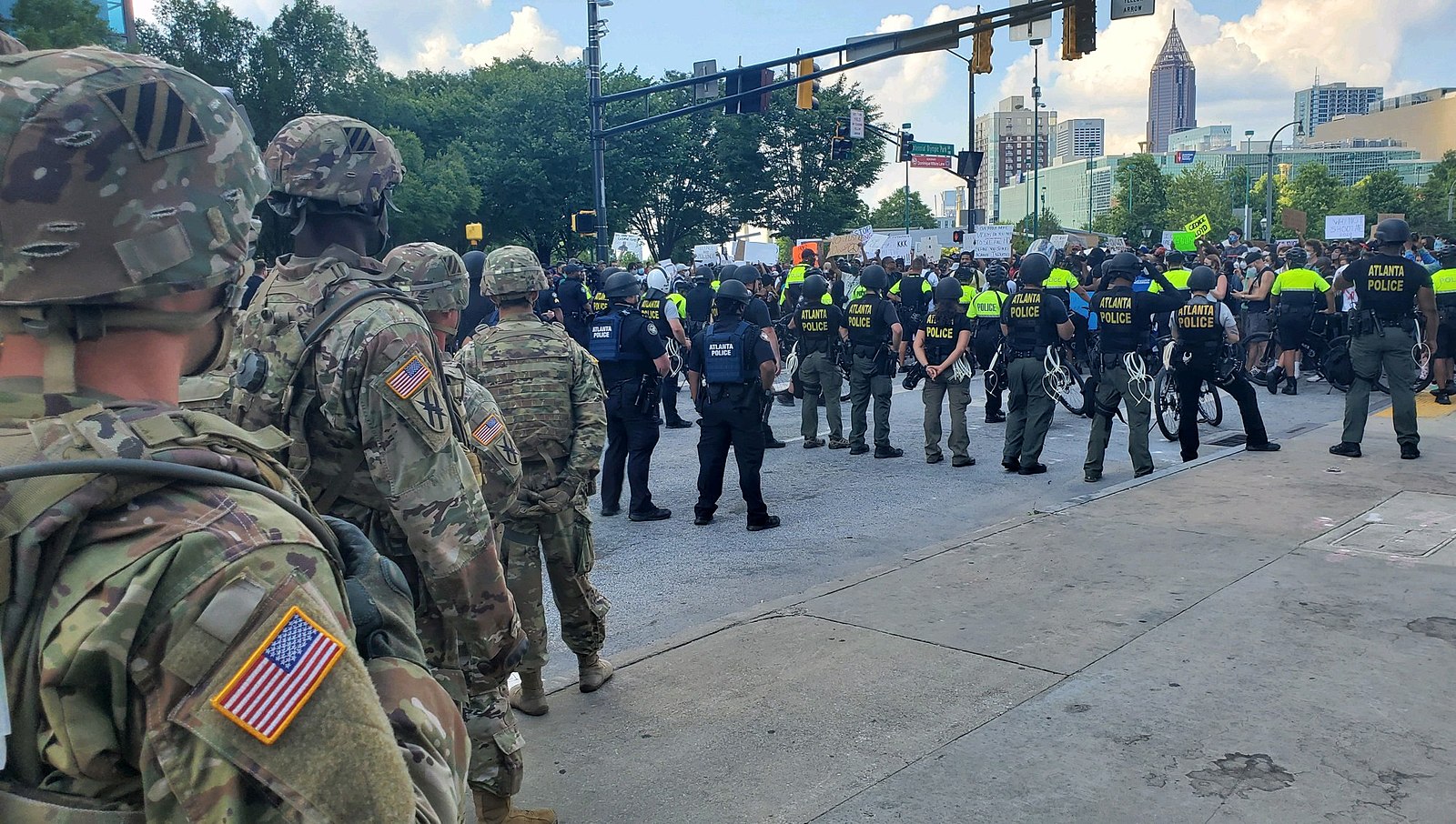 Five years ago, a single white man walked into Atlanta’s International Airport with a lawfully owned AR-15 rifle; simply making a statement that a law-abiding citizen should be able to lawfully carry a firearm in public places. Notwithstanding the benign nature of the stunt, the Atlanta and national media went into high alert, as did law enforcement, which questioned and followed the man closely to ensure he did not bother anybody (he did not). Nowhere was there reported a word of public support for the gun-toting citizen.

Last weekend, between 100 and 200 black men marched along a major Atlanta road to Stone Mountain State Park. Virtually all the marchers conspicuously carried AR-15s or similar style rifles, were dressed in black and wore masks. Most sported ammunition bandoliers and many were festooned also in protective vests.

There was nary a peep of criticism or concern expressed by the media or government officials, some of whom gushed over the fact that the armed phalanx was “peaceful” – well, sort of.

How times have changed. Or is it something other than the passage of time that distinguishes the one man carrying a single rifle in a public place in 2015, from hundreds doing the same thing just five years later? Oh, did I mention that a number of this past week’s armed marchers engaged in intimidating verbal confrontations with white motorists?

The July 4th marchers were led by a foul-mouthed masked man calling himself “Grand Master Jay” in an oh-so-clever play on the manner by which KKK big wigs referred to themselves as “Masters,” “Wizards,” and the like. The marchers’ oft-shouted demands called for everything from reparations for slavery to removal of the three Confederate generals carved into the massive granite outcropping.

Calling themselves alternatively a “Black Militia” and a “Not F*#@ing Around Coalition,” the armed marchers strutted around the streets near the state-run park, stopping cars and making demands of white (not black) drivers. Police who stood by as little more than disinterested observers.

The inescapable irony in the scene, which would have been comical aside from the fact that it was not, lies in how the authorities treated these armed, black marchers who were verbally assaulting and menacingly intimidating law-abiding citizens on the public thoroughfares. The kid gloves with which the authorities treated the black marchers, was in clear contrast to the heightened concern exhibited by authorities and the media, whenever armed white protestors occasionally gather in the vicinity of Stone Mountain.

The timid response by officials in Georgia last Saturday also is in stark contrast to the hyperbolic manner by which authorities in Richmond, Virginia and Lansing, Michigan responded to groups of armed white protestors earlier this year. Michigan’s Governor Gretchen Whitmer called the protestors “perverse” and various legislators declared how “afraid” the protestors made them feel.

The obsequious response to the Black Militia march by Georgia authorities all but guarantees there will be further such displays by this group and likely copy-cats.

A perfect example of how tepid responses to armed vigilantism begets violence was illustrated the very same Independence Day weekend in Atlanta, when eight-year-old Secoriea Turner was fatally shot. The little girl was killed near a burned-out Wendy’s, where on June 12th a black man was fatally shot by a white police officer after he had resisted being arrested and then fired a taser at the officer.

For three weeks following that incident, Atlanta’s mayor and police chief had turned a blind eye to barricades that had been erected at the burned-out fast food restaurant and then allowed armed blacks to “guard” the area. It was only after Secoriea Turner was shot on the night of July 4th that the mayor awoke to the problem and issued her first tough words against the armed thugs; too late to save young Secoriea Turner.

Timidity in response to armed thuggery, whether accompanied by high-minded rhetoric of “racial justice” or extortionate demands for “reparations” money, only begets more of the same. Whether authorities in Atlanta and other cities ever will awake to this reality is at best very iffy in today’s racially strained environment. The real question is how many more innocent lives will be lost in the meantime.

These Sheriffs Are Defying a Conservative Governor. You’ll Agree When You See Why.
Supreme Court Deems Half of Oklahoma American Indian Reservation

The democrats want a race war, they are baiting it every day and if the second largest criminal organization in the world doesn’t start prosecuting Obama’s administration for the most heinous criminal conspiracy in the history of the United States of America! This country WILL explode!

None of this is new. There has been a double standard for black people for years. We have a black congressional caucus, BET, Jet Magazine, black panthers and so on. You will not find that in any other race. Now BLM (Black Looters Matter) and more are popping up every day. They control most state and federal jobs, get every hand out imaginable and still want more because they came from slaves. My family did not own a slave nor would we. That was rich white and black landowners and other rich people. Most white people could not afford a slave, we were the damn slaves trying to eke out a living. White people owe them everything, although most white people struggle to make ends meet just like them? They cause the most crime, have more in jail, shoot the hell out of each other on a daily basis but Black Lives Matter just like the little 8 year old girl and no arrests. It is pure bullshit and we know it.
We are not allowed to speak up, carry a gun, celebrate our history and wanting a much better life for everyone. Most (the majority) of white people do not care about race. We are too damn busy trying to raise a family while the local, state and federal government takes our damn hard earned money each week to support bullshit like this illegal march or illegal riots. We just sit and take it every damn week. Mark my words, one day we will not take it any longer. It is like a pot on the stove getting ready to boil. We are fed up.

The difference is in the objective of such “militias”. We see that the single white man had no threats and his goal was to reaffirm his right to be armed. The black men were there for the purpose of intimidation and domination. If allowed to continue, they will eventually turn violent. And MAYBE then that same group of black politicians will take action to stop their criminal activity. Most likely not.
The SAME response by those same Democrats to muslims who threaten and work to intimidate. I call it “Neville Chamberlain” syndrone. It is also known as COWARDICE.