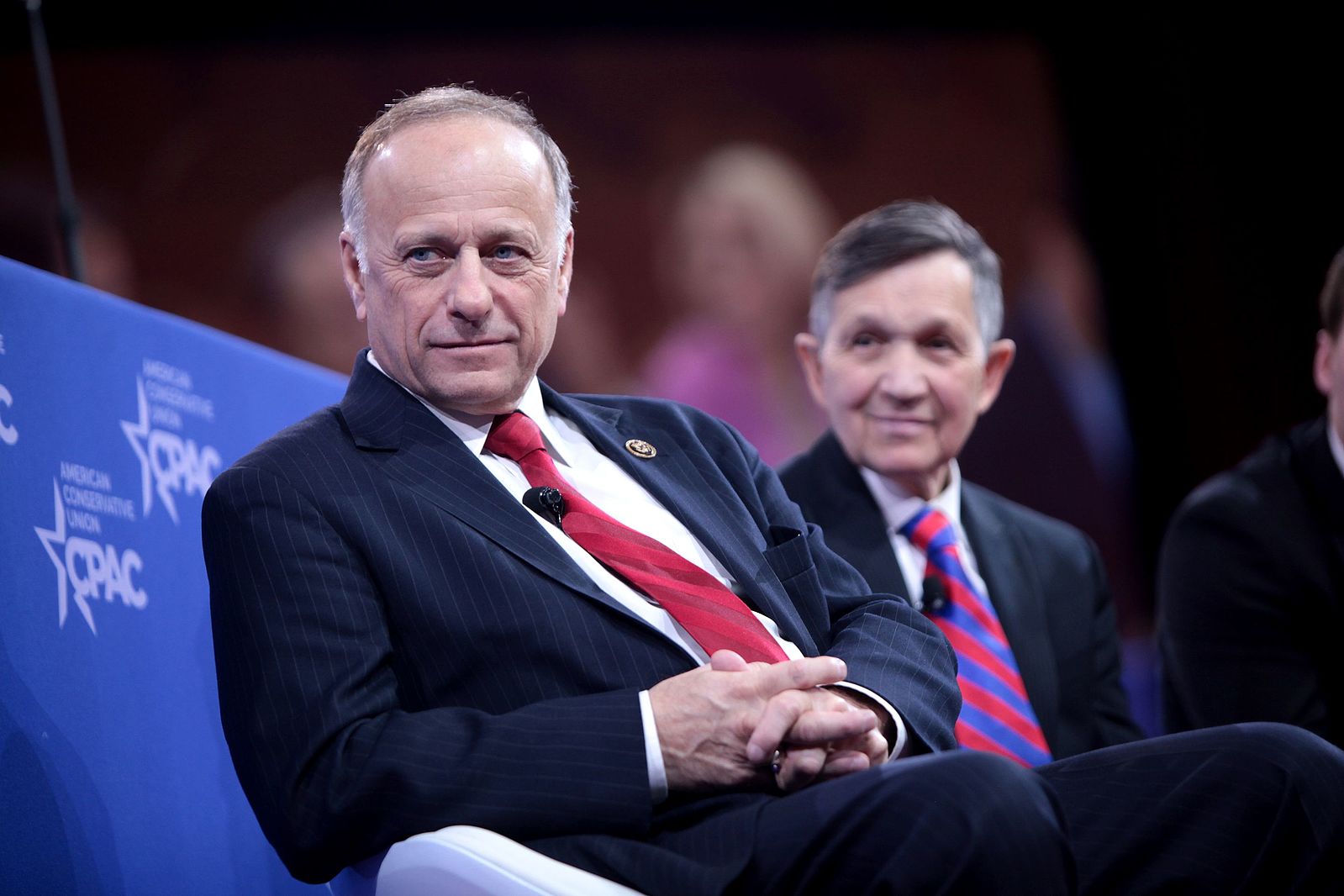 Congressman Steve King (IA-4) was dealt a crushing blow last evening as he lost his reelection in the primary to Iowa State Senator and businessman Randy Feenstra.

King was one of the more controversial members of Congress. Last year, congressional GOP leaders removed King from his committee assignments after he questioned why “white supremacist” and “white nationalist” were offensive terms.

King, a staunch border wall advocate and immigration hawk, also caught fire for saying that Dreamers were like drug mules possessing “calves the size of cantaloupes.”

GOP leaders and allies who were concerned King’s comments would have implications for other Republicans appearing on the ballot rallied to support Feenstra’s challenge:

Party leaders such as Karl Rove and Rep. Steve Stivers (R-Ohio), the former chairman of the National Republican Congressional Committee, have donated to businessman Randy Feenstra, who has emerged as King’s top challenger for the Republican nomination in Iowa’s 4th Congressional District.

National groups, including the U.S. Chamber of Commerce, the National Association of Realtors and the Defending Main Street super PAC are spending heavily in favor of Feenstra. The challenger has also received endorsements from the National Right to Life Committee and the Republican Jewish Coalition, giving him key allies in the effort to unseat King.

“Yes, [Feenstra can win], and I think it’s important for the GOP that he does,” Rove told The Hill. “All the ugly, bigoted things Steve King says results in mud thrown on every other Republican.”

Scott Reed, a political strategist for the U.S. Chamber, said he’s worried that King is so toxic that it could drag down Sen. Joni Ernst’s (R-Iowa) reelection bid, potentially imperiling the GOP’s Senate majority.

As a result, Feenstra significantly out-fundraised King nearly 3 to 1. The only notable supporter/donor left to King’s campaign was former Colorado Congressman and 2008 presidential candidate Tom Tancredo who, like King, is an immigration hawk. Coincidentally, King and Tancredo also bear a striking physical resemblance as well. In fact, they look so much alike NPR noted in 2007 that they confuse reporters, other congressmen, and “even their own wives.”

After conceding the election to Feenstra, King posted a Facebook video saying that he warned Feenstra there are “some powerful elements in the swamp that he’s going to have an awfully hard time pushing back against them,” referring to the power of the super PACs which backed Feenstra’s challenge.

King also noted none of his opponents raised an issue with a single vote he put up or a single statement he made claiming that the challenge to him was an “effort to push out the strongest voice for full-spectrum constitutional Christian conservatism that existed in the United States Congress.”

My com-laborer’s sister-in-law makes USD/83 every Hour on the web . She has been jobless for a half year however a month ago her salary was USD/13726 simply taking a shot at the web for a couple of hours. have a check here.this interface !~!~!~!.GOOD LUCK ? …………………………HERE►More Jobs

167,000,000 Americans are like King demanding recognition of ‘white’ that won two world wars and the war of 1812 and the Civil War in the US and got Spain and other foreign countries out of the US like President Theodore Roosevelt did and who beat the King and gave us our Constitution – which is why the Marxists are losing again but this war is necessary so the remains of the Marxists can be exiled. – 167,000,000 American Patriots are not forgiving Oregon and other god-forsaken states who move with the lies of revisionist history – even George Washington and Abraham Lincoln were white, and supreme in their lives and patriotism to this country. – Yep, it’s time to face the BLM and islamists and Antifa fascists who are all Marxist Democrat Political Party creations and let them know 167,000,000 American Patriots never planned to lose the carnage they initiated that they are not welcome, if there are remains they should be exiled.

Don’t know Feenstra but the majority put King out of office! Gotta watch what you say in today’s world! Some people just don’t get it! King was one of those!

Said the soyboi, who is now fell ating Chamber of Commerce leaders cuz someone paid his Price.