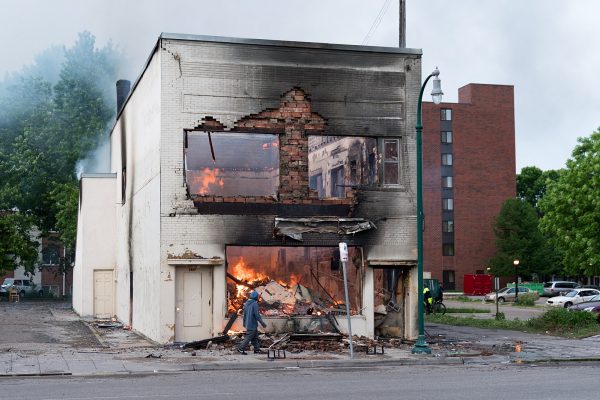 Given how much the media had moved on from the story, I was going to forego comment on former Vice President Joe Biden’s recent observation that any African-American who could not decide whether to vote for him or President Donald J. Trump in the upcoming election “ain’t black.”

What’s happened over the last few days in Minneapolis has made me rethink my decision.

George Floyd died Monday while in the custody of the Minneapolis police. As shown in videos taken of the incident, he was handcuffed in the prone position and in no apparent way resisting arrest. Yet he continued to be restrained by Office Derek Chauvin, using the hopefully unusual technique of placing his knee on the man’s neck and applying pressure.

Floyd’s death – some are calling it murder – has Minneapolis up in arms and flames. Footage of the looting of a Target store and the burning to the ground of a Wendy’s and an AutoZone are all over social media. Chauvin and three other officers who stood by and watched as Floyd insisted repeatedly he could not breathe with the officer’s knee on his neck have been let go from the force and are under investigation by local and federal authorities.

They are, of course, entitled to due process which they, unlike Mr. Floyd, must get if only to prove those of us who adhere to the standards of equal justice under the law are better than those formerly uniformed thugs who appear to have used their power to take the life of a fellow American.

All of this has put race relations once again at the front and center of the national conversation. I am not willing to accept the argument that America’s police are fighting an undeclared war against the black community, an idea that underpins the Black Lives Matter movement, but I do agree with them that cops are all too quick to use and overuse force in situations that could be handled better if in certain situations the police showed as much respect to the people they were confronting as they expect to be shown.

What does all this have to do with Biden? Plenty. His lapse into slang, his use of the word “ain’t” was most likely meant as an expression of his connection to the black community.

Thank you very much for that. It would not be wrong to see it as a condescending expression of your opinion about African Americans who, you seem to think, do not, as a rule, use proper English. That’s right up there with what you had to say about people who operate 7-11s and other doozies you’ve uttered over the years that suggest you have very little respect for people outside your socioeconomic cohort.

It wasn’t but a couple of days before President Trump and Attorney General William Barr threw the considerable weight and power of the U.S. Department of Justice behind the investigation into what happened to George Floyd. This is as it should be. The apparent flagrant abuse of his power by one Minneapolis police officer and the inaction of three of his colleagues is something that should concern us all, no matter to whatever racial and ethnic group the victim might belong to. How long it would take for a President Biden to activate the appropriate federal agencies in a case like this is a fair question.

Biden’s “You ain’t black” was all too easily dismissed as a harmless joke by people who scrutinize every jot and tittle of every Trump speech, remark, and Tweet. It was not harmless. It was debasing, inappropriate, and uncalled for – especially from a man who calls himself a defender of civil rights and a friend to the nation’s minority communities. The disparity in coverage reveals a double standard on race that helps no one and does nothing to heal the divides that keep us from being truly one nation.

Someone, I think it was BET founder Robert Johnson said the former vice president need to apologize for what he’d said to every black person he met on the campaign trail until the end of the election. There’s merit to that suggestion since, as we’ve seen throughout the campaign, he holds himself up so often as being “better” than Donald Trump. For all intents and purposes, in a just world, he’s not – and he’s been telling us that over and over throughout his political career.

Interesting that you earned precisely the same amount that your buddy cejoji9784 (see below) claimed s/he earned. Makes us believe you didn’t earn $16,839 or even $16. You seem merely to copy and paste what other people write for you and make up some stupid name. You interrupt meaningful, civil discussion with irrelevant nonsense. Please shut up.

A. D Roberts
Reply to  pj

Ignoring this spammer, I will say that actions speak louder than words.
That is for sure the case. But in Biden’s case, neither words or actions are good. He feels up children and women. And he likes to say things like, “this is a big f***in deal”. And “just stick a shogun out the window and shoot into the air.”.
Then his actions: Forcing the removal of an investigator in Ukraine.
2. Business deals between his family and China. 3. His “speeches” where he can’t get any facts straight.
LOL

Another day, another Biden screw up……..

Getting paid every month easily more than $15k just by doing simple job online. Last month i have exactly received $16839 from this online job just by giving this 2 hrs a day online. Now everybody on this earth can get this job and start earning more cash online just by follow instructions here……..for more info visit any tab this site Thanks a lotCopy Here………………….Read More Details

Interesting that you earned precisely the same amount that your buddy becoda2214 (see above) claimed s/he earned. Makes us believe you didn’t earn $16,839 or even $16. You seem merely to copy and paste what other people write for you and make up some stupid name. You interrupt meaningful, civil discussion with irrelevant nonsense. Please shut up.