Liberals Plotting to Impeach and Remove Trump Over Coronavirus Response 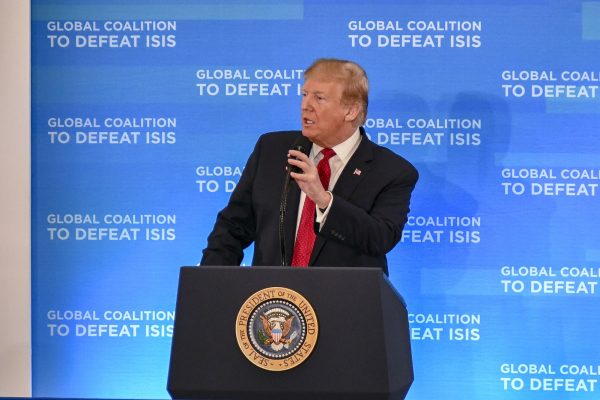 Falling short of the votes they needed to impeach President Donald Trump over “Russian collusion,” some liberals are pouncing on the current coronavirus crisis to lay the legal groundwork for forcibly removing him from office.

Among them are a D.C. university professor and Barack Obama’s top Justice Department lawyer.

Chris Edelson, an assistant professor of government in American University’s School of Public Affairs in Washington, D.C., penned an opinion column for Market Watch calling on Congress to demand Trump resign, or impeach him.

“It’s painfully obvious that no normal person — let alone any typical president — would respond in the way President Donald Trump has,” writes Edelson, “At each stage, he has lied, he has created confusion, he has made reckless predictions, and he has, once and for all, demonstrated his manifest unfitness to serve.”

“It is clear even to casual observers that Trump is in over his head and is interested mainly in public messaging that he thinks will mitigate personal political damage to him in an election year,” Edelson writes.

He suggests public leaders step in before Americans vote and formally demand Trump resign from office.

“We may not be able to fix the damage that Trump has already caused, but at least we can stop him from doing any more harm. Public figures ought to be calling on the president to resign from office, to get out of the way and let competent people step in,” Edelson writes.

Even if they were to demand his resignation, Edelson admits Trump would never do so.

“Readers who are generally receptive to this conclusion may not unreasonably ask: What’s the point? Trump will never voluntarily leave office. That is a fair observation, and I do not expect him to do so,” Edelson writes.

That, according to Edelson, leaves Congress with only one solution – impeaching Trump over his coronavirus statements.

“In a functioning system, elected officials from both major political parties would call for the president’s resignation, and he would be forced to leave office or face impeachment and removal through the constitutional process,” writes Edelson.

Joining Edelson’s call for impeachment or removal is Neal Katyal, who as Acting Solicitor General under President Barack Obama was the federal government’s top courtroom lawyer.

In response to a Trump tweet comparing coronavirus deaths with deaths from influenza, Katyal replied with “OMG,” followed by “Twenty Fifth Amendment.”

Under the Twenty-fifth Amendment to the U.S Constitution, the president can be forcibly removed from office if the vice president or a majority of the cabinet declare him physically or mentally incapable of carrying out the duties of the office and two-thirds of Congress vote to affirm that determination.

In the previous session of Congress, U.S. Rep. Jamie Raskin, a Maryland Democrat, introduced a bill that would create a panel of doctors, picked by congressional leaders, who would give Trump a mental health examination and recommend whether he be declared mentally incompetent and removed from office.

Trump has accomplished so many good things that has helped to save lives—He is one of the few that is capable of working around the clock, making difficult decisions, and keeping control of his emotions—And still there are a few that would remove him from office—Listen to me you ignorent ones that fall into this “remove him” catagory—There is no-one else that could handle this horrible situtation we are in and you should appreciate him in lieu of having the desire to remove him—Just imagine Bernie or Biden being in charge and the mess either one would make in this situtation—Wake up you dummies and look at the job he has done for America—Or maybe you are so stupid you can’t even see that—We do not need you to get involved in something you are not capable of handling, so leave things alone and just go away—America does not need your incompetience, nor your lies, so shove off—You are not wanted here.

Edelsen is the one who should be removed. He lacks the skills to argue any point and has shown his bigotry and treason to America.

Very well put hope you will really tell us how you feel on many other topics.

Nor are YOU, you clown! And the first time I listen to a blowhard “professor” from the American (COMMUNIST) University in Washington, DC will be the LAST!!

Well put! I have only 2 years of college, am 71 and have raised 4 kids alone, have 17 grandkids and 5 great grands and even I can see the idiocy of the democratic party! How do they cradle their heads at night with all the evil they spew? Satan rules them and they’re too stupid to see that! God will give them exactly what they want…hell! Not everyone who says ‘Lord, Lord!’ will enter heaven. This is the best they will ever see…,poor souls! Rich in money, poor in spirit! No worries…God’s got it all under control. NO man can put assunder what He has put in place. Repent before it’s too late [which by all indications, it already is too late!]!!!

Nancy, congrats on your big family! I recently became a granddad for the first time (Feb 3) and inherited two other awesome kids from mom’s previous relationship.
I believe it’s NOT too late to repent. When Jesus returns, THAT will be the time to repent and ask forgiveness for our sins. At this point it’s enough simply to believe in Him and do our best.
God bless you and your family!

Well stated, Nancy. God bless you and the US of A! We NEED IT with maniacs like this clown teaching at AmeriKKKan University in Washington, DC (no less). American MY BUTT!!

Chris Edelson and Neal Katyal are dumbass motherfuckers with shit for brains. These two idiots are going to get their fucking asses kicked. We’re coming for you Chrisy and Nealy boys. You cocksuckers are going down. Assholes.

Shithead, I resent the fact you are being overly kind to those losers. Also, I hope the first pencil neck fan that utters that contemptible “I” word is shown the door and gets a recall run up his butt. $30 million dollars wasted by the “i”diots needs to NEVER happen again. In fact I don’t understand why the demonRats shouldn’t be required to pay the money back. Just like some people do that loose in court cases.

You are so right! We need to get rid of these commies.

Could anyone imagine if Hellary or Bidumbass were president during this pandemic. Millions of US citizens would die if either of these assholes were president. Any Democrapeater for that matter.

Exactly. Where was this deranged liberal lunatic at when his mentor, the muslim traitor, hid everything he could from the American people in 2009 regarding the swine flu that killed hundreds of thousands of people because of his stupidity and incompetence?

Amen~ You nailed it, this commie lawyer is hard up for work so he thought if he fired up the already sick media he might be able to get a little work! This sick fn jerk just needs to go away, FAR AWAY!

What WILL happen is that Pelosi and all the Democrats including Schiff and Nadler will be arrested for the first Hoax Impeachment b/c they committed crimes.
The main crime is that the Constitution Commands the entire House be called to vote on ALLOWING subpoenas.
Pelosi shrugged that off, that’s what happens when crooks in Congress have gotten away with their crimes incessantly for 30 years as she has.
The result of Pelosi’s vile sedition to strike at the Constitution is that all 18 of the witnesses giving testimony in Schiff’s committee as well as behind closed doors were illegal and all their subpoenas unlawful.
Pelosi’s attempt at yet another impeachment of the president will mean committing Double Jeopardy.
Really cannot get over the snake attitude of the Democrats to believe they are above the law and they keep on doing it no matter how oft they are reminded they are not above the law. – they may be considering all those hidden laws that Congress voted for itself to protect itself, such as that silly one that a Senator or a Representative cannot be charged with a crime if what they said happened inside Congress but they can be charged if they do the same thing outside – that’s all poppycock, all of Congress are our employees, elected just to represent us, not to defraud us with their lobbyist pals, and Barr should be ready to make the whole shebang of wrongdoing by Congress for the last 237 years right.
Beats all why none of them saw Trump as The Gamechanger – but maybe they did and certainly do now which is why they’ve been trying to crucify him for the last four years.
Barr isn’t stupid and neither are we and Pelosi hasn’t had a prez who is a Constitution President (which is why he keeps winning all those Supreme Court cases.) – so the time is now when we are all in accord that the Law must be obeyed.

Totally agree time to get rid of ALL Democrats and charge them for ALL the crimes they have committed, go back as far legally allowed and dredge up EVERYTHING. Come next election vote every last one of them OUT OF OFFICE. NO PENSION, NO INSURNACE, NOTHING it is a temporary job conifined to the 4 years if elected and NOT a permanent position. No bennies

Amen—these CLOWS and the schools that spawn them must be investigated for teaching SEDITION and even TREASON!

To Chris Edelson: It is painfully obvious that you are not a person who should be in a position to honestly educate our college/university students. I would offer that most American Citizens, would appreciate that you would forward your immediate resignation from your position as a member of the staff at American University, School of Public Affairs. It is painfully obvious that you are not capable of offering a true educational experience to students of that University or any other. Your position is to teach and educate, not to exercise your personal opinions as a method of teaching. That is why our Colleges and Universities have not provided our nation with enough graduates to actually pursue their dreams, or their ambitions to offer their reason of expending the cost to their education. So please take your opinions to the street corner and not in the classroom of one of our Universities.

Amen to this, Fred. So-called teachers in our colleges and universities, like Chris Edleson, should concentrate on educating and training their students to take their place in society. Save their washed up opinions for people who operate outside the school setting, not for the classroom. People should stop donating to colleges. The cost to parents to send their children to college is absurd; especially since the government has taken over the student loan program. Maybe, what will come out of this pandemic will force changes in the way students are educated in college. It’s certain that what is occurring at the present time isn’t working.

Amen, Fred–this guys is NOT A TEACHER, BUT IS A MENACE and activist!