‘Believe All Women’ is Based on Faulty Logic

The concept, which was the engine that drove the accusations against Justice Brett Kavanaugh, all but erased due process from sexual assault allegations.

Instead, it asked that people simply believe women’s stories regardless of facts or evidence. It rejected the idea that accusations of sexual assault are weaponized for political gain and told us that the MeToo movement is anything but partisan.

This was wrong. And now it’s become clear that the hypocrisy of the MeToo movement is no better exemplified than by former Vice President Joe Biden, a MeToo supporter who now finds himself accused of sexual assault and harassment.

When these kinds of allegations concern one of their own, the reception is vastly different from the establishment media and the Democrats. Their lukewarm response can only be described as a “gut-punch” to the credibility of the MeToo movement.

In 1993, then-Senator Biden allegedly pushed his staffer, Tara Reade, against a wall, forced her legs open with his knee and digitally penetrated her. While Reade’s allegation remains unproven, it has undoubtedly poked an enormous hole in the Left’s position as the defenders of female rights.

Under the circumstances, it is clear they are anything but. 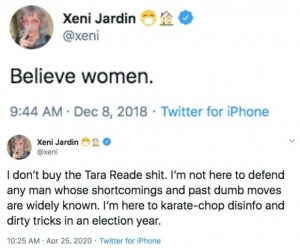 Although the MeToo movement originally set its sights on taking down sexual predators such as Hollywood producer Harvey Weinstein, the Reade story has crystallized that the movement has devolved into a biased political weapon.

In the years since its inception, we have seen it used against a varied breadth of men, including President Donald Trump and Justice Brett Kavanaugh.

The Kavanaugh and Trump cases were characterized by unfounded allegations, little to no evidence and no real witnesses. And despite a significant lack of proof, the media pushed these stories; journalistic integrity be damned.

The Biden case is no different, a he-said, she-said situation that can neither be proven nor disproven. However, its reception by notable Democrat and media voices has been distinctly and wildly disparate. They have demonstrated that their stance is no longer “believe women”, but rather, “believe some women”.

In the last week alone, two women stepped forward to corroborate Reade’s account, confirming that the young staffer told them details about the event in the 1990s.

A newly surfaced video also appears to show Tara Reade’s mother calling into CNN host Larry King’s TV show. The unnamed woman does not mention sexual assault or harassment, but asks for advice, saying her daughter has faced problems with the “prominent senator” for whom she works but doesn’t want to approach the press. 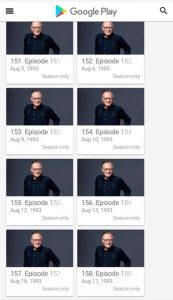 While these pieces of evidence are no slam-dunk, they certainly add a level of credibility to Reade’s claims – credibility that was sorely lacking in the Kavanaugh and Trump cases.

Despite that, this story has gained little traction among mainstream elites. And if anything, they’ve questioned Reade’s believability further.

When President Trump was accused of sexual assault by E. Jean Carroll, the story was flogged by mainstream outlets around the world despite the lack of evidence to corroborate her claims. The alleged victim even appeared to use the incident to bolster sales for her new book.

In 2019, the New York Times, who had published dozens of articles condemning Justice Kavanaugh, released a fresh series of allegations. This time, they claimed that he’d sexually harassed a female student at a party. The article, however, failed to mention that the student in question did not even remember the incident.

Such stories and articles are what it looks like when the right political figure is accused of sexual harassment and assault. Journalistic accuracy and legitimacy cease to exist.

But, when a Democrat is accused, the coverage looks very different.

After examining the stories of the eight women accusing Biden of sexual harassment, the New York Times proclaimed, “there is no pattern of sexual misconduct by Mr. Biden,” despite outlining instances where he’d inappropriately touched women and made them uncomfortable.

Despite similarities to the Trump-Carroll, Kavanaugh-Blasey Ford stories, the Biden-Reade account has been essentially ignored by journalists and media outlets. Some of the most vociferous voices condemning President Trump and Justice Kavanaugh, such as Alyssa Milano and Bernie Sanders, have stayed noticeably silent when it comes to the former Vice President. Unless, of course, they’re asked, in which case their answers question the validity of Reade’s account. 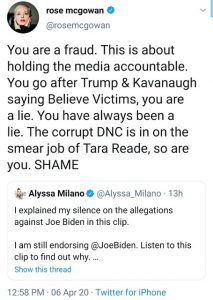 Their hypocrisy is breathtaking.

With catchy slogans like “Believe Women”, ardent MeToo advocates have spent years undermining the accused’s right to due process. The establishment media has played a significant role in hurting the credibility of legitimate victims while bolstering support for unfounded, illegitimate, sexual assault claims.

Although the Reade story remains unproven, it shines a light on the insincerity and double standard of those people most vocal about bringing bad men to their knees. Until, of course, that man is one of their own.

Sydney Watson
Writer. Journalist. Australian/American political commentator. And your very favourite deplorable. To be fair, I actually hate writing these "about me" things. Honestly, if you're reading this, on a scale of one to "not even a little", how much do you care? Ya don't. But I digress. If you're here, I'm glad. I hope you enjoy my commentary on all things political and my questionable accent.
Share
Facebook
Twitter