Captain of COVID-19-Stricken US Aircraft Carrier – Hero or Danger? 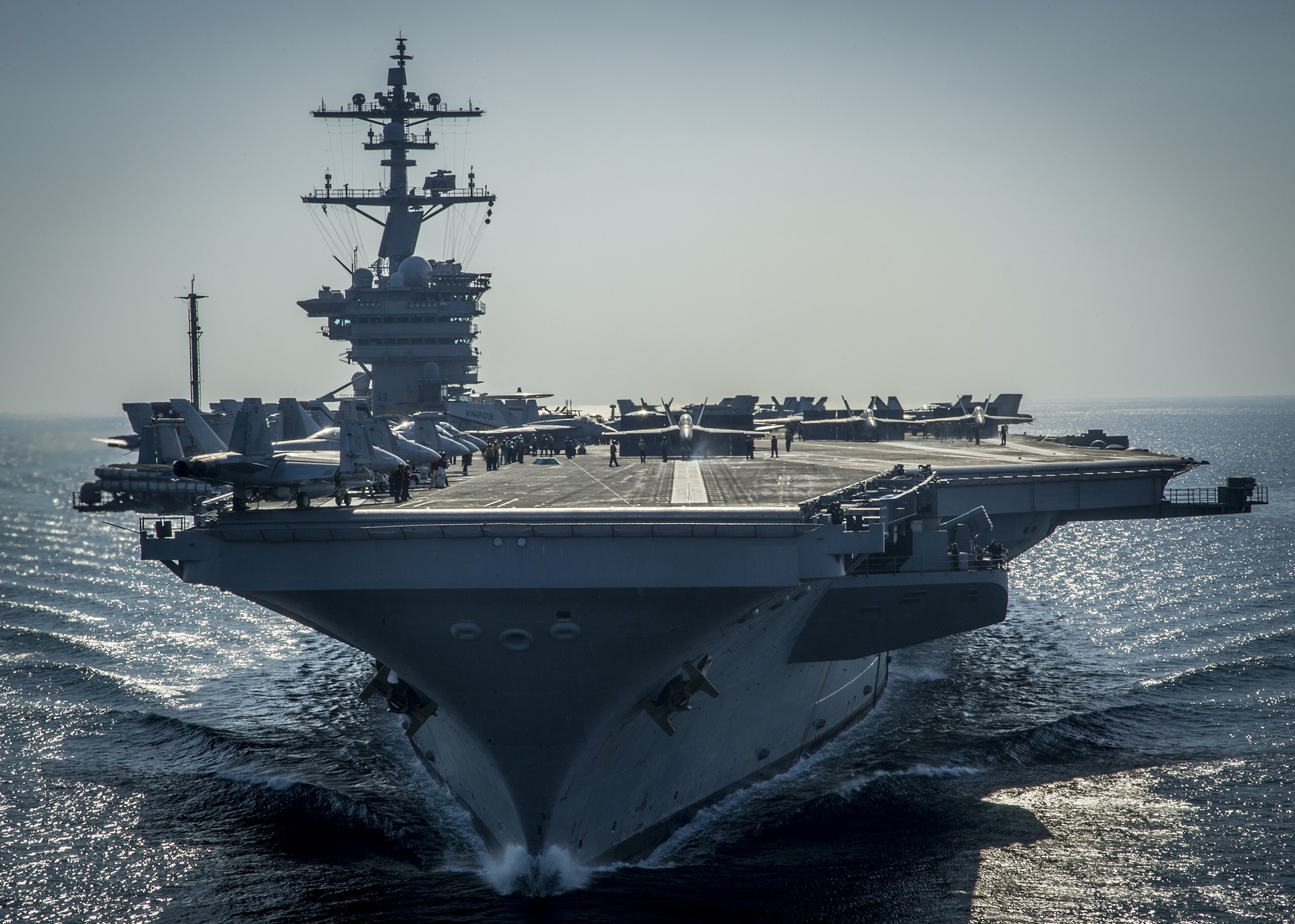 After his letter to superiors in Washington DC, pleading for help for his COVID-19-stricken ship was leaked, the captain of the Nimitz class nuclear-powered aircraft carrier, the USS Theodore Roosevelt, was removed from duty by the Acting Secretary of the Navy, Thomas Modly.

The supercarrier is now docked on the island of Guam in the Pacific where a bulk of the 4,000-person crew are being disembarked and quarantined. As of April 1, the Navy said that 93 sailors from the Theodore Roosevelt were confirmed to have contracted COVID-19 and another 86 were displaying symptoms.


In relieving the captain on April 2, Modly cited “lack of trust” in Captain Brett Crozier, for not following proper procedures and sending the letter to persons outside the chain of command.

According to The Drive, Modly also accused him of not sufficiently communicating the seriousness of the situation prior to sending his letter, but also disputed Crozier’s level of concern. Modly said the letter “misrepresented the facts,” created an undue panic among families, and offered a dangerous and inaccurate signal to America’s adversaries about the service’s readiness, reported The Drive.

In his letter, Crozier also argued that the US was “not at war,” provoking the Acting Navy Secretary to retort that “neither are we truly at peace.” According to a tweet from Kevin Baron, the Chairman of the Joint Chiefs of Staff, General Mark Milley, was more emphatic in his reply saying “we’re at war with 3 different ‘enemies’ … We’re at war with COVID-19. We are at war with the terrorists. And we are at war with the drug cartels, as well.”

Regardless of the merits of Crozier’s letter and how he sent it, much of the crew seemed genuinely unhappy with their Captain’s dismissal and were seen giving Crozier a hero’s sendoff as he left the ship. The videos below from crew members re-posted by The Drive show the thunderous applause, cheers, and chants from the crew for their departing Captain:

The navy captain that relieved of command, due to “lack of trust “ Nobody who has any common sense wants this captain gone. Least of all his crew. Posting this before it gets taken down. ??? pic.twitter.com/ExVX24f4XV

Meanwhile, this COVID-19 incident has much broader strategic implications. The War Zone warned last week that the spread of the virus onboard Roosevelt could be a “canary in the coal mine” warning for the entire Navy and all its ships. More specifically as The Drive noted:

Theodore Roosevelt‘s predicament increasingly looks to have upended carrier activities around the world. There are reports now that one of the two carriers present in the Middle East, the USS Harry S. Truman and the USS Dwight D. Eisenhower, will be diverted to the Pacific. This has raised concerns that there could be a fight brewing for carriers between different U.S. regional commands.

Whether Captain Crozier was right in his actions and helped spare his crew from a deadly spreading disease, or he overreacted and projected vulnerability and weakness to our enemies in a time of crisis – or perhaps it was a bit of both – is yet to be seen.

What we do know is that COVID-19 is presenting the US Navy, and all our armed forces, a new, unseen threat to manage and mitigate. Biodefense needs to be fully incorporated into all aspects of fleet and military operations. This may be the future of warfare.

How is it “Possible ” that the crew of an Aircraft Carrier or Any other Ship that is basically on
” quarantine” – the crew have been there since deployment when it sailed out of port x Are there In-Transfers since then ????? Was the Infection an Inside Job ?? x The Covid -19 problem has been in the News since End of January ??? There are Doctors on board ??
So exactly how did the Infections blossom into the quantity that brought about the Captain’s
Letter of Alarm x So there should be Culpability on All Levels and the “Buck stops w/Whom” not the time to be Politically Correct or give the Left and the Biased Fake News MSMs additional fodder which is what is happening

The ship is routinely resupplied while at sea and it is quite possible that the virus could have come aboard at that time.

Just how many cowards do we have leading the navy. The facts are that corona is not that bad for young people. The fact is that most people get over it since it is nothing but a very bad cold. Want to bet that this captain was a Democrat. Want to ask them how many are hospitalized or on ventilators? THAT is how you can tell how bad the situation is.
And for certain, NO ONE HAS DIED ON BOARD YET.
Pathetic.

overhead flights by China. Remember how close ? Also did they dock in Singapore, the Hon Kong, Pearl Harbor or as above resupply

I read that it docked in Vietnam as a liberty port. I do not think that was a good idea. I was a sailor and after a long time at sea was ready for a break but would have waited for Guam or San Diego.

Tey had a port of call in Veit Nam.

There is facts we don’t know, but when a highly contagious disease is affecting the crew of a nuclear aircraft carrier, it is cause for concern. I don’t know the date or how much info the captain or his medical officer had. The facts about the virus have changed frequently! When did he notify his superior and what was the response. If he was “stonewalled”, which seems likely; he probably put the safety of his crew and the vessel above his career. i applaud him for that. The action taken by by those in the ‘chain-of-command’ was unprofessional to say the least; that includes Gen. Milley, JCS Chair. The General is right in stating we are at war; he didn’t include, but perhaps should have, the Chinese Communist party who may be responsible for the release of the recombinant virus from the Wuhan bio lab. Available information suggests the virus was engineered to weaponize it.

I heard a report that they were let off the ship in Vietnam which is in close proximity to China and that’s where they may have picked up the virus. If so it seems like not the smartest move on the part of the Captain and crew.

It is not the Captain’s choice about port calls-that is the choice of Navy Dept. hand in glove with State Department. There id some talk that Viet Nam is talking about givin us Cam Rhan Bay back as a port to replace the ports lost now that China influence has ascended in the Phillipines.

Hero.
He was broadcasting May Day to us as a last resort it seems and shut down by his superiors.
Something’s afoot, not very good at all.

YES SIRDIRK>>>>Procedures be damned….his men were dying and he was trying to reduce the damage as quickly as possible….GOD BLESS HIM !
No Time for chain of command BULLSHIT….Lives were being lost and bunches of others endangered.
He was alerting the “Brass” and they eventually got the problem solved….fired???? NO, Given a medal would be far more appropriate.

Very immature statement, as well as, simply stupid. His men weren’t dying. He had some of his crew of 5,000 not 4,000 sick from a flu virus.. 18-25 year olds aren’t dying from this virus… unless they have some other medical history and, if that were, the case, they would be medically discharged if even allowed to be in the service to begin with. So you would rather that the crew who has been infected and some simply carriers of the virus to go ashore and infect thousands of others. That’s okay for you. You obviously don’t know a damn thing about aircraft carriers.. They are a floating city with many places to eat, different berthing areas, movies and entertainment areas, hospital facilities and a medical staff more than capable of handling a serious flu outbreak… Again, NO ONE DIED… You must be a reporter… Before every member of the 5,000 crew members got on board that ship for duty, they went through basic training… Part of that basic training was biological and chemical warfare.. They are trained how to deal with and take care of the sick and incapacitated crew members. The medical staff is as good as any hospital… They could have easily and safely, in my belief, stayed on board and been safe, as well as, recovered from the virus.. But NO, you’d rather we take these man AND women and put them ashore to mingle with civilians to infect thousands of others. The Captain of that ship was totally wrong in going above his chain of command, alerting the press and news media about his unsafe ship that could very well have become a target to terrorists, rogue armies and haters of America. I would suspect that those on here thinking the Captain was right have never been in the military, much less been on an aircraft carrier.

Very true. There was a Commander on board, with higher rank, but did not go to him. I know the whole qorld prefers to go public with their complaints, but in the military, you have a chain of command. He should have been relieved of duty and punished, but not discharged from the Navy. Now the acting Secretary of the Navy has resigned over the affair. He should stand his ground, just like Truman did with MacArthur.

This man is a hero. Very disturbing to know that he acted accordingly for his love for his crew
He saved lives and where were all the other officers who kept quiet? Shame on the US Navy and their guidelines when other Navy seamen. airmen, etc. work and are abused by their superiors. I fully appreciate this man for what he did. The Navy gets such a bad reputation and it makes me sick. The Navy has so many wonderful men and women but plan on leaving just as soon as they can. Need to evaluate every man or woman who leaves after several years of endless, tiring, work with no gratitude granted and especially those dedicated to protecting our country. Thoroughly disgusted.