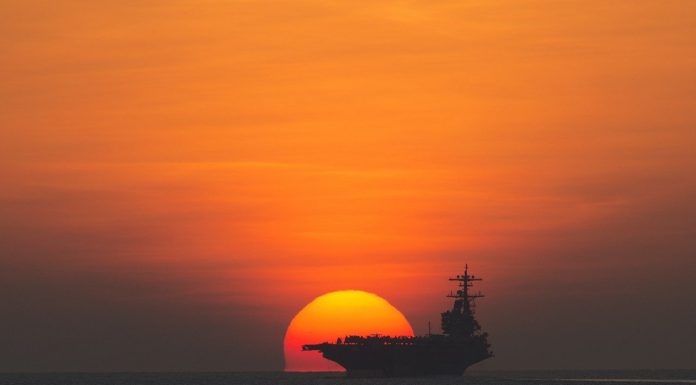 President Trump may be the one man that can bring sacked Navy Captain Brett Cozier and acting Navy Secretary Thomas Modly together.

Modly relieved Captain Cozier of his command of the aircraft carrier USS Theodore Roosevelt earlier this week after accusing Cozier of leaking a letter to Navy brass pleading for help as over 100 sailors abroad his vessel tested positive for COVID-19. Since then, more sailors, including Cozier, have tested positive.

Modly initially praised the captain for bringing the issue to the Navy’s attention; however, his opinion quickly soured, leading to the captain’s dramatic removal, and Modly’s berating of him in a poorly received speech to Roosevelt’s crew.

The navy captain that relieved of command, due to “lack of trust “ Nobody who has any common sense wants this captain gone. Least of all his crew. Posting this before it gets taken down. 🙄🙄🙄 pic.twitter.com/ExVX24f4XV

Acting Navy Secretary Thomas Modly appeared to worsen the situation when he gave a surprise speech to sailors on the USS Theodore Roosevelt and called ousted Captain Brett Cozier “too naïve or too stupid” to be a commanding officer of a ship like this, Reuters reported.

Modly later issued an apology to the Navy and Crozier and said, “Let me be clear, I do not think Captain Brett Cozier is naive nor stupid. I think, and always believed him to be the opposite. We pick our carrier commanding officers with great care. Captain Crozier is smart and passionate.”

Trump told a press conference that he is good at “settling arguments.” Trump said Cozier should have resisted sending the letter but he did not want to destroy “somebody for having a bad day,” the report said.

Several Democrats in Congress are calling for Modly to be fired following the speech in which he admonished the ship’s former commander for expressing concerns over the coronavirus in a strongly worded letter that was leaked to the media.

Strategic Move – U.S. Troops and HQs Going From Germany to Poland and Belgium

While most of the media fixate on President Trump’s stated motives for removing a few thousand U.S. troops from Germany, they ignore the bigger...
Read more

I said it before, but I will say it again now: the action taken was too extreme and there appears to be little reason to remove the captain. Restore him to his command and clear his record, unless there is some explanation for why not.

It’s those Congresspersons who should be fired At Once.
They’re so quick to destroy people, all of us the way they’ve been going at it for nearly 4 years now, the entire length and breadth of the Trump Administration which has been the best Presidency in 237 years b/c it’s been entirely proactive for us citizens the whole way.
We can count on Trump to handle the Crozier-Modly dispute in a brilliantly admirable way that both the Captain and Secretary both come out of it as Heroes – and everyone seems to’ve forgot we’ve got a commander and a lot of his crew down with the evil China mayhem, another of their viruses from the parent disease, COVID-19, which someone needs to go in and destroy while Crozier and Crew recover.

Find out who leaked the letter and then hang them.

He should IMMEDIATELY BE RE-ASSIGNED to his formal position. It was a mistake of where he sent it all but Firing from his job was way too much and should be assigned back to his position. AMEN!!!

I can understand the loose lips situation. Three tours in Nam and keep your mouth shut. This is an entirely different situation. The crew is your first obligation, not the politicians. maybe the letter should not have been leaked, but I’m sure the captain didn’t give it to anyone thinking that would happen. He had a duty to protect his crew, and his ship, and was making his superiors aware of a really dangerous situation. It was handled poorly not by the Captain, but further down the line, as is obvious by current conditions on board. Politics does not belong on the ship, or in the chain of command. Find the leak, restore the Captains command, restore the confidence of every sailor in the fleet, and make America great again. Tom Olden past president Fleet Reserve Association branch 118 cape coral Fl. Stand tall Captain.