Shortly after Iranian Revolutionary Guard Corps (IRGC) forces conducted live fire drills in the Straits of Hormuz, attacking a 2/3 sized replica of a U.S. carrier, the U.S. Navy mocked the Iranians. A post on the Navy’s Instagram account included a photo of Iran’s dummy carrier along with the caption: “Iran builds target ship. They’re experts at that.”

As predicted in my earlier piece, on Tuesday, IRGC forces attacked the fake aircraft carrier, landing troops by helicopter on the replica’s wooden deck. It later fired missiles from various small boats and at least two ballistic missiles from underground launchers which I described in another article today.

The U.S. Navy has the world’s largest aircraft carrier fleet. This includes 11 massive, nuclear-powered supercarriers, in addition to its fleet of nine amphibious assault ships such as the just commissioned, USS Tripoli. The latter Marine Corps-oriented ships can launch helicopters and Vertical/Short Take-Off and Landing (V/STOL) aircraft like the V-22 Osprey, and the Marine F-35B joint strike fighter.

When configured with full loads of F-35Bs, these impressive ships are called “Lightning Carriers”.

U.S. Carrier Strike Groups (CSG) also include numerous other warships as escorts and complements, such as cruisers, destroyers, and frigates, as well as submarines.

Other than its dummy target ship, Iran has no aircraft carriers, or anything remotely close to them. The IRGC Navy relies on small missile boats to carry out ‘swarm boat attacks,’  but the U.S. Navy appears to be saying it sees all Iranian ships as good “targets.”

The term ‘game changer’ is an overused phrase. However, in the case of the stealthy F-35 Joint Strike Fighter, this term may not be...
Read more
Military

While the U.S. test firing unarmed, nuclear-capable intercontinental ballistic missiles (ICBM) is not rare - this was the fourth test this year - launching...
Read more
Military

While critics of President Trump’s redeployment of U.S. troops in Europe continue to bash the moves, Poland is showing how a real ally behaves....
Read more

Indeed they have to label everything in case they shoot down another passenger plane loaded with Iranian civilians like they did, killing all on board.

And if you understand the details behind that you would not embarrass yourself with stupid comments.

Bryce, why don’t you enlighten A. Olsson about the details, rather than attempting to insult him?

Help me out Big Al, is Bryce “Ignorantly Stupid”? Or “Stupidly Ignorant”?

It’ s a pretty skinny difference, but he will try to use it.

Ukranian plane which had authorization to take off from Tehran shot down by Iranian forces resulting in the death of 82 Iranians. They claimed they mistook a commercial liner for a cruise missile. So which part of A. Olsson’s comment was stupid in your esteemed opinion? Seriously?

So, as a Iranian apologist, are you saying they didn’t shoot their own civilian aircraft down while preemptively launching missiles at a U.S. base?

I see you are practicing your ‘intelligent comment’ skills again…

Olsson who is the “they” in your comments? Iranians regarding last years incident? Or the US in 1988? We’re you even born in 1988 if that’s what your referring too and do you know all the bodies on that plane were already dead? It was a deliberate act on Iran’s part and it didn’t work.

“Slight” difference in events. 1988 The US Navy was engaged with several Iranian revolutionary guard boats after a US helicopter had been shot at. The Airbus had originated from a military/civilian airport, which Iranian F4’s had launched earlier and F14’s just a week prior. Albeit a terrible tragedy somewhat different circumstances.

Apology sir. I misread, and I think I’m not the only one, Olsson’s comment. HE was the one disparaging the US. I now realize I’m preaching to the choir in my first response to you.

When you use a commercial aircraft to fly a missile profile and disregard warnings, you get shot down. A blip on defensive radar does not distinguish between blips as missile, or type aircraft. It only reports back flight profile on incoming threats. The Iranians were testing attack profiles to see what they could get away with and lost. Blame iran, not the US Navy. Remember the USS Cole?

Yes, those Iranians are true experts at building ⅔ scale toy aircraft carriers to be manned by ⅔ scale (3¾’) imaginary toy soldiers… Alright, they would be a tad harder to hit and kill. ;-))

Well, Iran’s navy, army & air-force have ‘become caricatures’ of their former selves…always happen’s when you let the rag-heads take-over… 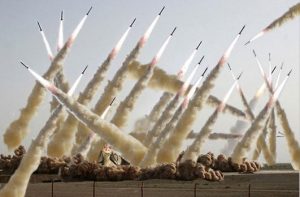 Where’s the fun in just shooting at large, stationary homebuilt targets that can’t fight back or even offer a modicum of defense?

Practicing on the COMPLETE RANGE OF TARGETS seems to make better sense.

Iran is a Joke. Enough said. If it wasn’t for the Coward and chief Obama , there would never have been a hostage taking of our sailors. The humiliation they endured because of that Muslim Bastard traitor cause the U.S. Navy to be embarrassed!

the Iranians like to put on these shows for PR purposes. They U.S. could destroy the entire Iranian Navy in 14 minutes and 22 seconds if they had a mind to. So this exercise was a PR event to make themselves feel good.

AAN Staff - August 6, 2020 4
Project Veritas' James O'Keefe has never been convicted of a felony. He's never done anything that should impede his right to keep and bear...