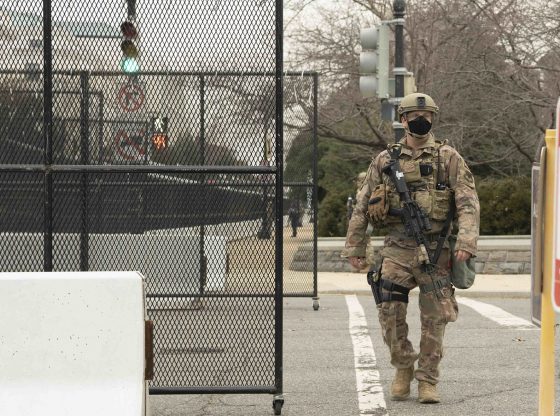 On Thursday, the U.S. House of Representatives narrowly passed a sweeping $2 billion measure creating a permanent National Guard force at the Capitol following the incursion of the U.S. Capitol.

Most Republicans opposed the measure, which passed 213-212, with three Democratic members voting “present” and three opposing the bill. GOP lawmakers cited duplicative spending and objected to a provision that adds the National Guard to the Capitol security force.

It passed a day after Democrats and 35 Republicans voted to create a commission to investigate the Jan. 6 riot.

The Capitol perimeter has been protected by an 8-foot fence since shortly after Jan. 6. That day, hundreds of angry protesters supporting [45th] President Donald Trump pushed their way into the building, smashing doors and windows and injuring overwhelmed police officers in a quest to track down lawmakers voting to certify Joe Biden the winner of the presidential election.

Democrats tried to impeach President Trump for supposed “incitement of insurrection” to no avail, with the U.S. Senate rejecting the impeachment measure and voting to acquit Trump on all charges.

During his speech at the ellipse in front  of the White House on January 6th, the 45th President told the crowd explicitly to march “ over to the Capitol building to peacefully and patriotically make your voices heard.”

You know there’s something wrong with your institution when you need to establish a military force to protect itself from the very people you represent!

Not really. The people they represent are in Mexico City and other points south of the Rio Grande.

I agree with you…..but I wonder who they really fear and I want to know who the 35 Republicans are who voted for this commision. This whole idea of the January 6th protest being an ” insurrection” is ludicrous and if it was conducted fairly…this would be exposed…but from what I understand…Nancy Piglosi will be picking the people for the commision so we know this is a set up for another “hit job” and just another way to keep the smear on Republicans and a diversion from the failing Biden administration.

PS….I hope this doesn’t pass in the Senate….another waste of our money…also who voted for this National Guard protection?

Pelosi is a dangerous lady! She needs to go!

All Chronic Alcoholic’s in any position are dangerous.
Soviet Russia collapsed because most of its leaders were alcoholics.
Trouble is Pelosi thinks alcoholism gives her the liquid courage she needs to destroy the republic. Alcholic Nancy Pelosi bring 7 things to the table that God Hates
Proverbs 6:16-19
“16 These six things the Lord hates, Yes, seven are an abomination to Him: 17 A proud look, A lying tongue, Hands that shed innocent blood, 18  A heart that devises wicked plans, Feet that are swift in running to evil, 19  A false witness who speaks lies, And one who sows discord among brethren.