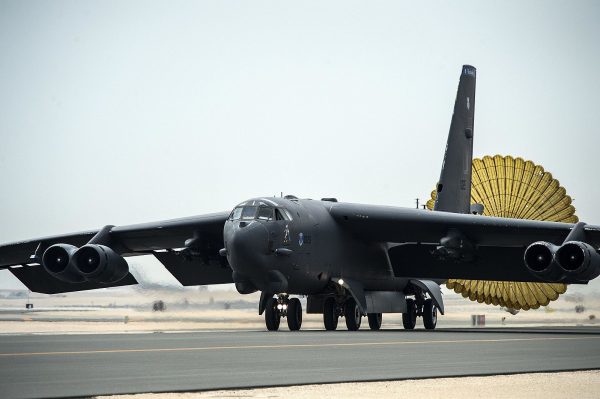 For those expecting a sudden de-escalation and mutual olive branches between Iran and the US, with Joe Biden as President, think again. Two B-52H strategic bombers just flew a long range ‘show of force’ mission over the Persian Gulf. This latest sortie continues the long-range deterrence missions aimed at Tehran that began in November.

Iran take note – There may be a new President, but the U.S. military remains the same capable, determined force it has always been.


A reported by The Drive:

The two B-52s from the 2nd Bomb Wing departed Barksdale Air Force Base in Louisiana, flew over Israel, Jordan, and Saudi Arabia, passed over the Persian Gulf near Qatar, then returned to Barksdale nonstop. The Pentagon has publically stated in the past that these types of missions are a means of deterring possible Iranian aggression, as well as signaling support to U.S. allies in the region.

For parts of the sortie, the bombers were accompanied by fighter jets from the Royal Jordanian and Royal Saudi Air Forces, as well as by fighters from the nuclear-powered aircraft carrier USS Nimitz. That supercarrier had been set to begin making its way home last year, but the Pentagon subsequently sent it back to the Middle East amid threats from the regime in Tehran over the U.S. military’s killing of Iranian General Qasem Soleimani last year, including some directed specifically at then-President Donald Trump.

USAF B-52 with RSAF F-15SA https://t.co/tDfj3OAKow at an "undisclosed location".. near the Persian Gulf today https://t.co/rwOCmhwHFw pic.twitter.com/cjdx1rTrPl

Defense One quoted an unnamed U.S. military official as saying: “We do know that U.S. policy is evolving with respect to Iran right now and the new administration will make some decisions here over the next while. I do know if we can continue to deter Iranian aggression… that it’ll give the policymakers more decision space.”

Other concerns included, would [Iran] try to do something to get some revenge on the Trump administration as they left office. We were also thinking ahead and going, okay, would they potentially try to test or pressure the U.S. military in the early days of the new administration?

This is the first long-range B-52 mission over the Persian Gulf since Biden took office last week, but it is now the sixth mission since November. Hopefully, Iran is getting the message.

Are you sure that biden didn’t air drop the rest of America’s wealth to support muslim violence? Or to take the attention off the CHINESE VIRUS?
And on that subject, the entire world should be ridding the world of communist china’s government.

biden didn’t do squat. he is running a defunct government because the insurrection act was signed and the military is in charge.

Is Biden going to take Credit for these actions also ?

No ! He will be removed . Dems will standby and say, “we had nothing to do with it. That is why we removed him” . Then nothing will be done to correct it.
Have you ever seen a demonicRat take responsibility for anything ?

He doesn’t have to , the media gave it to him.

Its amazing what rats and the media will eat to defeat sombody.

He wonts credit for all trumps done him and obama can’t stand being out smarted by Trump with out cheating to get even.