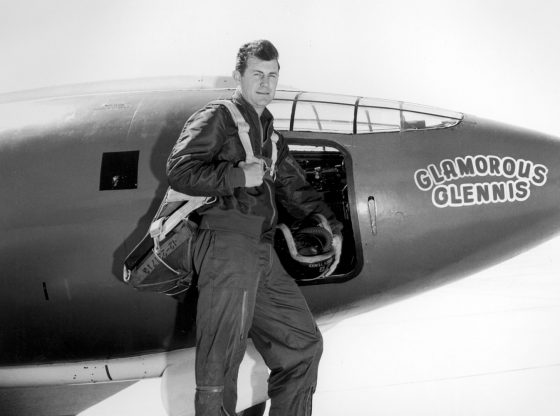 Chuck Yeager, American Air Force general, test pilot, and patriot, never attended college, but was the epitome of what a later book and movie about the early jet and Space Age, called “The Right Stuff.” Yeager died on December 7 at age 97.

A gruff, but consummate aviation professional, he was the first person to break the sound barrier on Oct. 14, 1947, in an experimental orange rocket plane called the Bell X-1, but better known as ‘Glamorous Glennis.’ His feat, accomplished at Edwards Air Force Base in California, was initially classified secret, which didn’t matter to him.

I was at the right place at the right time. And duty enters into it. It’s not, you know, you don’t do it for the — to get your damn picture on the front page of the newspaper. You do it because it’s duty. It’s your job.

A superior pilot with amazing skills and aeronautical knowledge, Yeager always said he was just doing his job. But he also saw himself as lucky, saying “All through my career, I credit luck a lot with survival because of the kind of work we were doing.”

Yeager did have one unique advantage though — “better than perfect” vision: 20/10 which allowed him to see enemy fighters 50 miles away. This came in very handy during his many aerial combat encounters.

Other than that, he appeared quite average in his youth. NPR notes that:

Yeager grew up in the mountains of West Virginia, an average student who never attended college. After high school, he enlisted in the Army Air Corps where he didn’t have the education credentials for flight training. But once the U.S. entered World War II a few months later, he got his chance.

Yeager quickly showed he was far from average though, and became a fighter ace, shooting down five enemy aircraft in a single mission, and four others on another day. Bob van der Linden of the National Air and Space Museum in Washington said in NPR, that Yeager also:

…got himself shot down and he escaped. And very few people do that, and he managed not only to escape. He got back to England, and normally, they would ship people home after that. And he persuaded the authorities to let him fly again and he did which was highly unusual.

On that same day he also successfully recovered the X-1A from a catastrophic spin that had him dropping 50,000 feet in a minute. This feat cemented his legacy as one of America’s top test pilots.

During the course of his long and distinguished career, Yeager ended up flying more than 360 types of aircraft. He retired from the Air Force as a brigadier general.

They don’t make men like this anymore! Thank you for the service & sacrifices you made for our country. May you RIP Amen