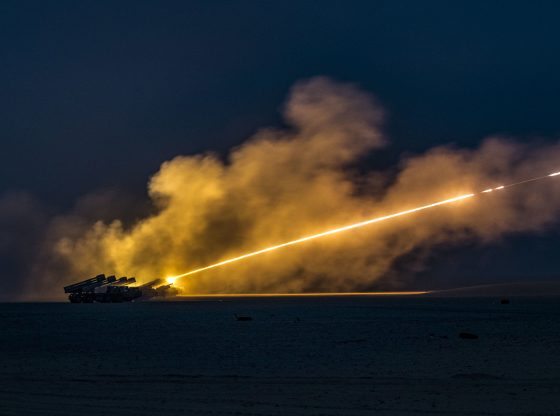 Despite the disinformation about the president’s commitment to NATO, under President Trump, the U.S. has significantly enhanced NATO’s defense where it matters most — on Russia’s borders. As part of that capability, during Trump’s four years in office, the U.S. Army in Europe has significantly restored its long-range artillery and rocket firepower.

And, as David Axes notes in Forbes, the Army “wants the Russians to know” it. In its latest message to Moscow, writes Axe:

The U.S. Army sneaked a pair of long-range rocket-launchers near Russia’s Black Sea outpost on Thursday, fired off a few rockets then hurried the launchers back to the safety of their base in Germany. All within a few hours.

The one-day mission by the Army’s new Europe-based artillery brigade was practice for high-tech warfare.

As Axe describes, to accomplish this high-speed rocket drill the Army loaded two new wheeled (not tracked) High-Mobility Artillery Rocket Systems (HIMARS) onto U.S. Air Force MC-130J transports in Germany, then flew them to Romania “unloaded, set up at a Romanian training range, fired rockets into the Black Sea then drove back to the airfield, loaded back onto the C-130s and flew home to Germany.”

After Russia’s invasion of Ukraine’s Crimea under the Obama administration, the Black Sea fast was becoming “a Russian lake.” To deter further Russian aggression, in late 2018 the Army sent a field artillery brigade back to Germany to fill a major firepower gap. The last U.S. tracked Multiple-Launch Rocket Systems (MLRSs) had been withdrawn from Europe in 2006 to focus on fighting in Iraq and Afghanistan.

Axe explains that the “Army—and U.S. Marine Corps, which shares the capability—calls these missions ‘HIMARS Rapid Infiltrations,’ or HIRAINs.” Deploying these wheeled rocket-launchers quickly by air means they can show up almost anywhere near an airfield. This new technique, notes Axe, is a “cornerstone capability of the ground-combat branch’s new approach to heavy firepower.”

As a Marine artillery officer aboard an amphibious assault ship in the Far East in the 1980s, we practiced something similar using 155mm artillery guns slung by helicopters, for similar quick turnaround “artillery raids.” As the Forward Observer, I would travel via separate helicopter to serve as the aerial spotter for the gun once it was dropped and set up for firing. But these new rocket launchers pack a lot more punch.

The U.S. Army’s new focus on Romania and the Black Sea is certain to ruffle Moscow’s feathers. Especially, as Axe notes, “considering the new munitions the Army is developing for the HIMARS and MLRS. These include an anti-ship missile and a replacement for ATACMS that can travel as far as 310 miles.”

It’s just 250 miles across the Black Sea from the Romanian coast to Crimea. Army HIMARS flying in and out of Romania pose a serious, and unpredictable, threat to Russian forces in the region.