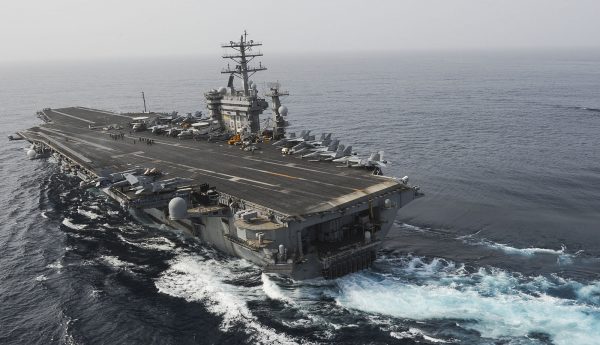 Amid increasing tension between the United States and Iran, the USS Nimitz supercarrier is sailing in the Persian Gulf, and just launched the first carrier strikes against ISIS in over 30 months.

The strike, part of Operation Inherent Resolve, the global coalition battling the terrorist group in Iraq and Syria, was coordinated with the Iraqi military but also serves as a reminder to Iran of America’s military capabilities.


According to Stars and Stripes, “A pair of Navy F/A-18F Super Hornets from Carrier Air Wing 17, embarked on the USS Nimitz, conducted the strikes on Sept. 23.” Cmdr. Rebecca Rebarich, a spokeswoman for the Bahrain-based U.S. 5th Fleet, stated that “The last such strike was by USS Theodore Roosevelt in [March] 2018.”

While there had been no carrier-launched strikes before last week in almost three years, aircraft from Marine Corps amphibious assault ships in the area have conducted strikes during that time, Rebarich said.

It is also the first carrier to enter the Gulf since the Iranians attacked a dummy aircraft carrier during recent military drills. That dummy carrier later sank blocking access to an Iranian naval port.

“The patrol, meant to deter aggression and ensure the free flow of commerce, comes amid high tensions between Washington and Tehran that have been ongoing since President Donald Trump unilaterally withdrew the U.S. from an Obama-era nuclear deal with Iran in May 2018,” noted Stars and Stripes.

The airstrikes also come as the U.S. reportedly warned Iraq that it was preparing to pull out of its embassy in Baghdad if it does not do more to quell the attacks on remaining U.S. forces in the country.

Will voter fraud only increase closer to the election?
Next U.S. Supercarrier Named After Black American Hero Sailor

Personally I believe they will. They have NEVER assisted this President by simply doing their jobs. Taxpayer money has been wasted on a fake impeachment that looked like a kangaroo court.
Money was also wasted on a smear campaign on justice Kavanaughs appointment to the Supreme Court. I will be glad when Obama’s treasonous
Actions are all totally exposed.
TRUMP 2020.