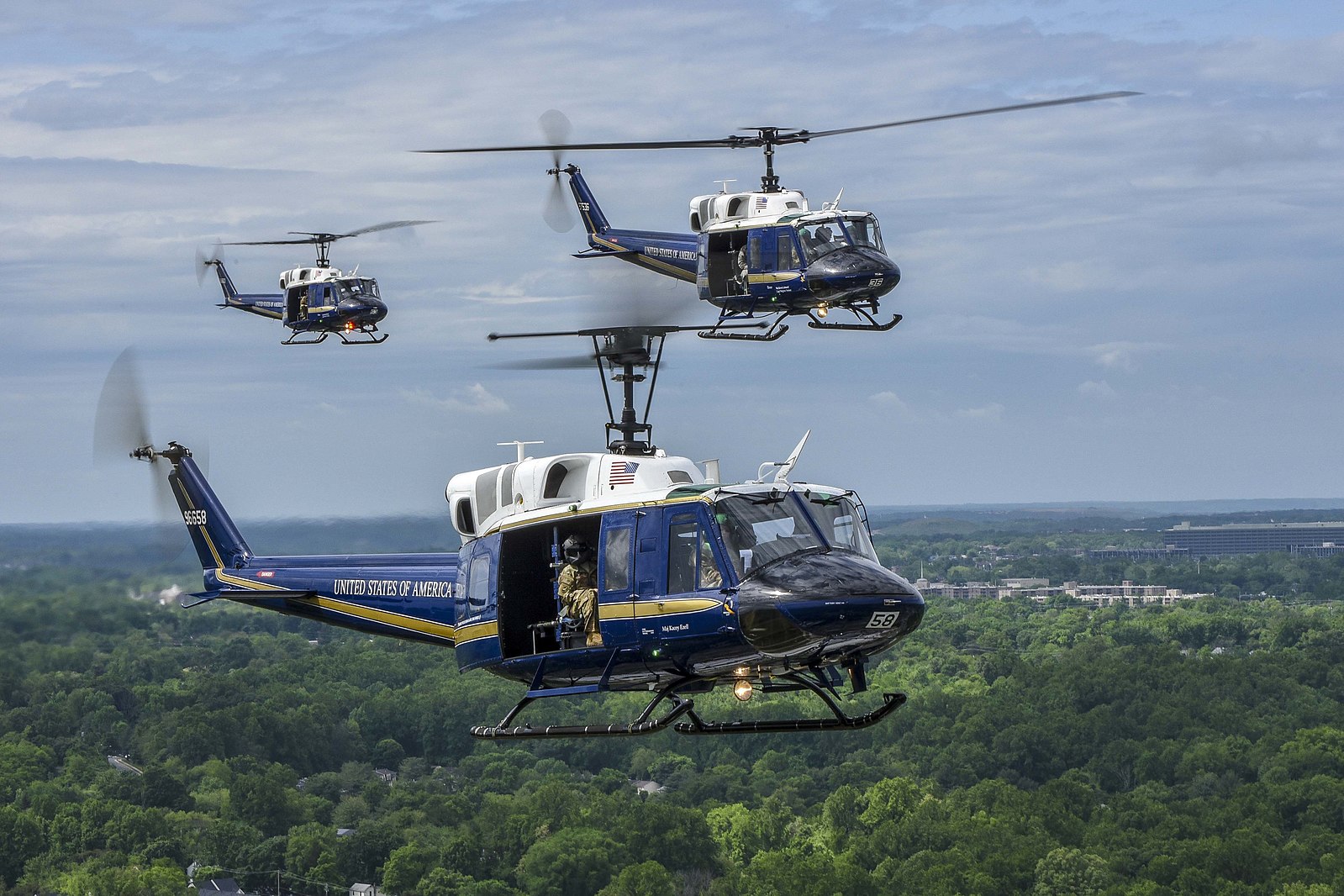 A UH-1N Huey ‘White Top’ dignitary support helicopter from the 1st Helicopter Squadron based at Joint Base Andrew in Washington, D.C. was shot at on Monday in nearby Virginia. According to the Air Force, a crewman was injured, and the helicopter was forced to make an emergency landing at Manassas Regional Airport, Virginia.

McClatchy reported that “the injured crew member, who was not identified, was treated at a hospital and released,” adding that the Air Force stated that – “Initial findings are that the helicopter was struck by a bullet resulting in a minor injury to an aircrew member and damage to the aircraft.”


According to the Air Force, the helicopter was flying about 1,000 feet off the ground, about 10 miles northwest of Manassas Regional Airport when it was shot at.

This incident is particularly significant since Joint Base Andrews is home to Air Force helicopter and jet fighter squadrons, as well as the presidential aircraft – Air Force One. McClatchy notes that the 1st Helicopter Squadron carries out “local airlift operations for senior military and civilian leaders, high-ranking dignitaries, distinguished visitors, Defense Support of Civil Authorities, and emergency medical evacuation.”

The Federal Bureau of Investigation (FBI) quickly “dispatched Special Agents and its Evidence Response Team from Washington, D.C. to the Manassas Airport,” reported McClatchy, adding that the FBI stated:

The FBI Washington Field Office is working jointly with our law enforcement partners, including the Air Force Office of Special Investigations [OSI], to determine the circumstances surrounding the incident.

The FBI also asked that “anyone near this area at the time of the incident who may have information please call the FBI at 202-278-2000.”

Hopefully, the FBI and OSI can quickly locate and arrest the criminal, or criminals, who did this and bring them to swift justice.

China Shows Off Its ‘Elite’ Sea Dragon Marine Commandos
How Do You Feel About the Kamala Harris Pick?

Lets start playing catch and release with these traitor liberals. Lets catch them and release them at 30,000 feet.

How about let’s REALLY start applying the rule of law and after giving them DUE PROCESS, something they deny conservatives. THEN punish them to the maximum extent of the law.

Sedition, treason, and domestic terrorism MUST be taken seriously by our leaders and our courts. If not, we’re headed for a civil war and a breakdon of the Republic.

You see, we conservatives who believe in the Constitution and the Bible don’t believe in ILLEGAL vigilante action. Now if the justice system REFUSES to act, it’s a different matter.

“Sedition, treason, and domestic terrorism MUST be taken seriously by our leaders and our courts.”

Someone should whisper that to AG Barr so as not to embarrass him.

Where did you pick up on ‘hate this country’ from CS? I heard that he was agreeing.

I would ask you to explain your irrational statement. But that is not possible. Maybe you just misunderstood what was said. Otherwise, Matthew 12;36 applies.

A. D Roberts
Reply to  CharlieSeattle

Waiting for him to indict Hillary, Comey, Brennnan, Clapper, Strzok, and Obama. Will we see justice???? Not likely. Pete Sessins was afraid to move against anyone. Barr probably is no different.

another attempt on president trump life, nancy peloski slow down you will never suceed

Well, until we stop the communist terrorist in our country it will continue and get much worse! Antifa, blm, black panthers (new and old), naacp, all soros groups, ALL MOOSLIME GROUPS, and the dnc are terrorist! They should be designated by congress as such, hunted down and put out of business!
Or, as the republican politicians normally do, start sucking their thumbs while holding their blankies and crying for their mommies!
I really don’t know who is worse!!!!!

I too would like to see many of the Republican politicians do more but singling them out when most all of the democrats are encouraging the bad behavior is counterproductive.

…e/GOP RINO’s are just as bad.

oh, you mean the CO-CONSPIRATORS with the radical democrats?

A. D Roberts
Reply to  Paul

Look at the voting record of McConnell, Cornyn, Collins, Mrkowski etc. Now tell me that they are our defenders, on our side????? The name RINO says it all. They deserve NO DEFENSE. In fact they are worse than Democrats.

Someone should whisper that to AG Barr so as not to embarrass him.