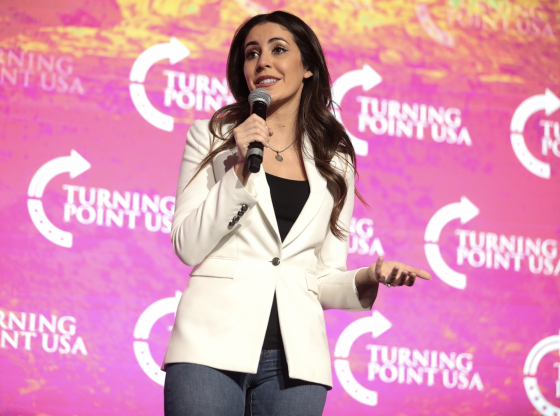 The most recent federal election filings by Republican Congressional candidate Anna Paulina Luna, whose biography, history, and temperament are already the subject of criticism by many conservatives and those in the America First Movement, reveal a $150,000 dirty trick. In fact, there could be some serious ethical violations as she used that amount of campaign funds on legal fees. Not to mention, an additional $32,000 was spent on her campaign manager in one quarter alone. This is not the kind of person I want to send to Congress – she is already showing how reckless her spending is with other people’s money.

Earlier this year, Luna (not her real name, and she is not Hispanic and does not speak Spanish) filed an extraordinary and sensational claim with the St. Petersburg Police Department and the State’s Attorney. She accused all of her prospective opponents in the upcoming primary contest for the Republican nomination for Congress in the 13th District (which is in the Tampa-St. Petersburg area) of plotting to murder her!


Luna’s sidekick, Erin Marie Olszewski, alleged that one of Luna’s then prospective Congressional opponents, William Braddock, told Olszewski in a phone call that he was involved in a plot with two other prospective Congressional opponents in the Republican primary, Amanda Makki and Matt Tito, to murder Luna in order to end her political ascendency. You can’t make this up! Makki ran for the nomination against Luna two years ago. Tito is a former State Representative candidate and decorated Marine combat veteran.

While this sensational charge got front page coverage in the Tampa Bay Times and POLITICO, both sources failed to point out that it was Olszewski who called Braddock (Braddock didn’t call her) at 1AM, and that the surreptitious recording of a phone call in which only the recording party knows the call is being recorded, is strictly prohibited by law in Florida. In fact, there are many instances of individuals being prosecuted for violating it.

Neither news organization pointed out that although a link to a recording of the entire call was included in Luna’s complaint to the St. Petersburg Police Department, because the call was conducted illegally, it could not be considered by the court in Luna’s failed effort to get a permanent restraining order against Braddock, who subsequently dropped out of the race.

Anna Mayerhofer (that’s Ana Paulina Luna’s real name) has pulled the restraining order scam at least 5 other times before. She filed a restraining order in an attempt to silence a family member who pointed out the falsification of her name and ethnicity, as well as against a woman in the panhandle who she thought was seeing her husband on the side. In fact, Luna claims that this woman violated the restraining order when she inadvertently visited a gentlemen’s club in Fort Walton Beach, Florida called the Red Rose Gentlemen’s Club, where Luna was violating military regulations by working as a dancer. Luna’s claim that she was only a cocktail waitress is vehemently denied by the club owner and multiple employees who worked in the club at the time. You can always tell when Anna Paulina Luna is lying; her lips are moving.

According to the Federal Election Commission report filed on October 15, it shows this legal hoax cost the Luna campaign $150,000 in legal fees. This is particularly problematic when you consider that Luna raised $231,000 in the last quarter, but spent $251,000. The filing for the Republican primary is not until next June, and the primary date is likely to be in August. The entourage of cult members, courtiers, hench-women, consultants, and camp-followers, and other hangers around Luna creates an unsustainable burn rate long before next year’s Republican primary. This campaign is just another example of political grifters like Luna trying to gain power while continuing to use GOP donor money on attorneys and consultants. It is the definition of The Swamp creatures that Donald Trump’s America First movement has tried to eradicate.

Perhaps Luna and her well-paid cabal believe the false “murder” narrative will distract voters from her past as a Democrat and Obama-supporter, not to mention her identifying herself on her California driver’s license as Caucasian rather than Hispanic. Anna Paulina Luna is the epitome of a chameleon; positioning herself as an America First candidate in the primary and then remaining silent on supporting Donald Trump in the 2020 general election. She has also done her best to cozy up to other “influencers” in the America First movement.

While I don’t know Ms. Makki, she appears to be an honorable woman. The smear of Matt Tito, who I do know, is both outrageous and insulting. Matt is a U.S. Marine Corps combat veteran who served his country with honor. He also took on a decidedly uphill race for the Florida state house against incumbent representative Ben Diamond who ironically is likely to win the Democratic nomination against a weak Democratic field.

In other words, should Matt Tito become the Republican nominee for Congress, this race against Diamond will be a rematch – except this time Tito will find a much more favorable constituency compared to the state house district in 2020. Tito took the nomination in a hopelessly Democrat district and waged an aggressive shoe-leather campaign running 18% ahead of President Trump and eight points ahead of Luna in this Democrat stronghold. Tito accepted the nomination largely because no other Republican would step forward and he felt strongly that no Democrat should get a free ride, particularly a Democrat as left-wing as Diamond.

Contrast this with Luna, who, although she served in the U.S. Air Force, was never deployed outside the country for combat. That makes her widespread use of a photograph of her in U.S. Marine fatigues and brandishing a military-style weapon, combined with her claim that “you can’t understand the concept of freedom being paid for with blood unless you’ve actually been there,” a very clear case of stolen valor. Falsely claiming combat duty is specifically prohibited under Florida State law. I can’t imagine the district’s many veterans will appreciate her lack of candor about her military record.

Luna’s husband, Andy Gamberzky, who she married, divorced, and remarried, is indeed a combat veteran who served his country with honor, and nothing here is meant to diminish or dishonor his service. His wife’s obvious attempt to conflate his combat duty to her “service,” is, however, a transparent fraud. Of course, in the recent report filed with the Saint Petersburg Police, Gamberzky signed his last name as Luna. His last name is not Luna and Florida law clearly states that it is a felony to sign a fake name to a police report. It is also possible that it was his wife who may well have signed for him without his knowledge or consent, to continue her “con” regarding her name for the people that would in fact look up the report. Either way, the illegal activity continues for the “Luna” family.

Luna and her supporters will counter all of this by pointing out that she was recently endorsed by former President Donald Trump. I highly doubt that our esteemed former President is aware of Luna’s false claims of combat duty, lack of any Hispanic ethnicity, name change, and her experience as a stripper, but then that’s what Republican primaries are all about. In fact, Donald Trump endorsed the opponent of Madison Cawthorn in North Carolina’s 11th congressional district in 2020 and Cawthorn defeated that Trump-endorsed candidate by 30 points. Today, Cawthorn is close with the former President. Endorsement mistakes happen and are often the result of establishment insiders having undue influence over outsiders like President Trump.

Who wins the Republican nomination in the 13th District of Florida is a crucially important contest when it comes to winning a majority back in the U.S. House of Representatives. Luna’s race against incumbent Charlie Crist was neither close nor impressive given Crist’s long service in both the State Senate and in various elected offices, including the Governorship. The flip-flopper Crist managed to hold on to 25% of the Republican vote against Luna. In fact, Luna ran 5 points behind President Trump, who only lost the district by one point.

Only time will tell what the impact of the revelations regarding Luna’s background, temperament, intellect, and ethics will have on Republican primary voters in the 13th District (or whether she will face legal action), but I am confident they, like President Trump, will learn not to make another mistake.

Guatemala Is not my go to area on news!

just one example among countless others, of why it is so daunting to clean the sw-amp.

I am a Floridian and wrote a review on this article that has been deleted. I researched both Luna and Makki in-depth and this article is definitely not accurate. Sad that a reputable site would promote so many lies about Luna, a 5 year veteran, and whose husband was awarded a Purple Heart. He is currently a member of Special Ops stationed at MacDill Air Force Base. I suggest doing your own research to find the truth.

Her correct name is lunatic .

Do your own research and find out the ‘actual’ reason for the name Luna. This young woman is a 5 year military vet. I live in FL in her district and did a lot of research on her and Makki for our last election. I voted for Anna Paulina who beat Amanda Makki. I have written other comments to this article which gives accurate information of interested in knowing the truth rather than what the writer of this article claims. The writer, who is a Guatemalan living in Guatemala City, I wonder where he got his information and when do Americans learn everything they read is not true.

Her husband is a reservist. I know him. You do your research.

Then where is he stationed and where do they live?