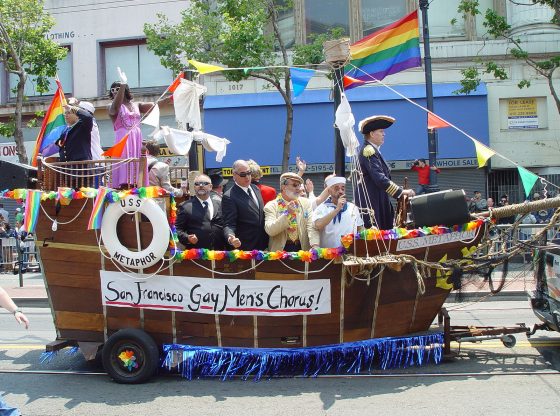 The famous San Francisco Gay Men’s Choir has reportedly released a new song on social media in which they declare that they are ‘coming for your children.’


The verses in the song directly mock the fears of parents who attempt to keep their children away from media that pushes an LGBTQ agenda, claiming that families will not be able to protect their little ones from gay propaganda:

You say we all lead lives you don’t respect. But you’re just frightened. You think that we’ll corrupt your kids if our agenda goes unchecked. Funny, just this once, you’re correct.

We’ll convert your children – happens bit by bit, quietly and subtly and you will barely notice it…

The song is a radical call by the far-left to consciously undermine traditional values by targeting America’s children, and a truly troubling sign of the times for parents attempting to keep their children safe from nefarious influences.

I don’t even have the words to say about this disgusting info. What a heap of garbage these perverts are!

Sodom and Gomorrah. Satan walks. Evil is being growing in our country. Pray

Come for my kid you won’t make it out alive. Freaking freaks of nature need to be locked up where they belong. These child molesters are back at it watch your kids. I’m calling them what I see them molesters and need to be in jail for life without parole

rich
Reply to  Raymond A Martucci

Come for my children and die you queer bastards

Raymond, you and I will be in the same jail. They won’t touch mine but once because dead men just rot in the ground where they will be put when they come for mine.

kappelvo
Reply to  Raymond A Martucci

Pack them all and send them to some nice place like Iran, Pakistan, Afghanistan and let them enjoy .
Disgusting rubbish of humanity.

Parents need to fight this by talking to their children and getting them to understand that being gay is a choice not something someone pushes for them to become . No one was born gay it is most assuredly something that each person decides on there own. These people need to leave the kids alone since they are to young to understand what this is all about.

…they could even teach that monogamy is a choice

you know I am not sure what is a choice but…… anybody that has lyrics like these are asking for trouble. I say let kids be kid, no bullying, no picking on them. I am not against gays, hell I have enough trouble with my own life but all this LBGT&%FH, what ever it is, is all a big show for attention. Now when these people go out, and what seems to me, says they will pick on kids, well then me I am all for picking on them and if I pick they will not like it. But then I didn’t start anything but I do my best to finish things. If these lyrics are true and they mean as they say then karma can be a big b..ch.

You are missing the point entirely
The song is saying that gay is something someone pushes for them to become .
Without the needed gay influence and sexual assault of children by gays there wold be few if any gays – The song is an admission of what PC culture has always denied – gays are a threat to children, and to the family,
Sodom and Gomorrah were not destroyed because everyone in those cities decided to seek perverson all on their own – it’s eaned by imposition.