Twitter Unveils New Controls on Trump Ahead of Election Day 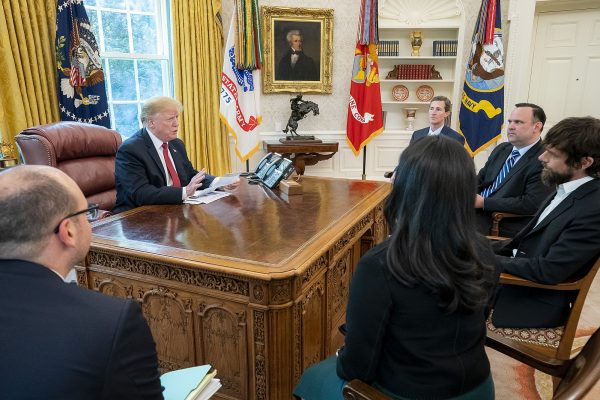 Just days after Facebook blocked a post by President Donald Trump, Twitter unveiled new controls on accounts in a bid to block “disinformation” before Election Day.

Twitter will now not only publicly label a tweet as “misleading” if it contains information on election rules or Covid-19 the company finds incorrect, “when people attempt to Retweet one of these Tweets with a misleading information label, they will see a prompt pointing them to credible information about the topic before they are able to amplify it,” the company announced.

Twitter also added additional restrictions that appear to many to be directly aimed at Trump, who uses the service to bypass the mainstream media and speak directly with supporters.

“In addition to these prompts, we will now add additional warnings and restrictions on Tweets with a misleading information label from US political figures (including candidates and campaign accounts), US-based accounts with more than 100,000 followers, or that obtain significant engagement,” said Twitter. “People must tap through a warning to see these Tweets, and then will only be able to Quote Tweet; likes, Retweets and replies will be turned off, and these Tweets won’t be algorithmically recommended by Twitter.”

Blocking retweets and keeping tweets out of timelines would greatly reduce Trump’s reach ahead of Election Day.

Twitter also announced they will label tweets by a candidate declaring victory unless that race has been officially called, which appears to many to be aimed at Trump.

“Democratic strategists have specifically warned of a ‘red mirage’ scenario in which Trump is shown to be ahead on Election night before mail-in votes are fully counted, perhaps causing the candidate to prematurely claim victory and dispute the results if Biden later pulls ahead,” Forbes magazine writes

“We suggest Twitter and Facebook immediately institute the following process for all of Trump’s social media posts, and for those of other political elites: Any time the president taps ‘Tweet’ or ‘Post,’ his content is not displayed immediately but sent to a small 24/7 team of elite content moderators who can evaluate whether the content accords with these platforms’ well-established policies,” Ananny and Kreiss write.

“Within, say, three minutes, such a team would decide whether to (a) let the post through, (b) let the post through with restrictions, (c) place a public notice on Trump’s account saying that the platform is evaluating a post and needs more time, or (d) block the post entirely because it breaks the company’s policies,” they add.

I hope this does not happen,because the social media are the same as fake news conglomerates! This type of censorship is uncalled for and limits the exchange of the truth!

What i hate is that we will have to get just as disgusting as they are to beat them.

Twitter is exceeding their authority as an impartial venue.

IOW the liberal ownership of these social media’s sites are again proving they’re more than willing to censor Trumps words along with much of the conservative side, that they know/hope will severely impact the election results.

More favorable to their liberal followers. 👎👎👎

Richard Sutherland Not only that they are trying to silence TRUMP

It’s discriminatory and censorship is wrong and it amazes me that people would utilize FB or Twitter.

Use litigation as a weapon to drive these vermin out of business.