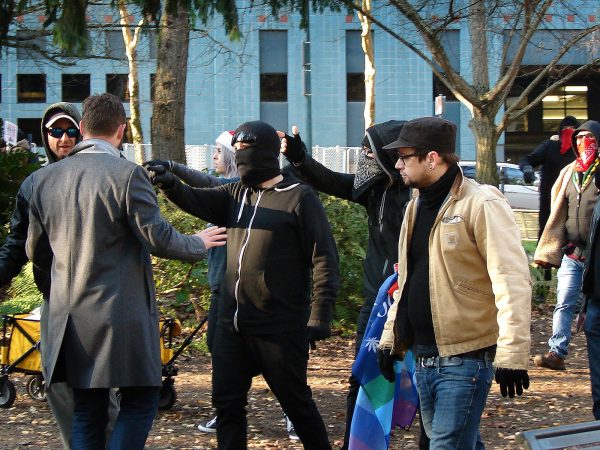 Fox News correspondent Mike Tobin appeared on “The Fox News Rundown” to describe what he saw on the ground covering protesting and rioting in Kenosha, Wisconsin.

The seasoned reporter painted a disturbing picture on the morning podcast.

“These things do start to fit a pattern when you see there will become a point where the line is drawn,” Tobin told host Dave Anthony. “It started out in in Minneapolis [after George Floyd’s death] at the 3rd Precinct, and then it moved out … But in Kenosha, it was that courthouse at the public safety building where the demonstrators were trying to get in every day and the police said, you know, ‘You’re not coming in here.’ That’s where the line is and that’s where the trouble starts.

The shooting that killed two demonstrators and wounded another “seemed to throw a wet blanket over things,” Tobin said.

“A lot of those kids who were out there at these demonstrations, it’s a big game for them,” he said. “I’ve heard people say things like, ‘Looting is fun.’ And in Minneapolis [and] some other locations, I’ve watched them pre-party in the parking lot for hours and then come out for the big show of destruction. So for some of them, it’s a game. And things got real serious that Tuesday night in Kenosha, and it changed the parameters of it.”

While Tobin described Antifa as a nebulous organization, an apparent trend has emerged from the unrest in many cities: most of the anarchists hail from elsewhere.

In Kenosha alone, 102 of the 175 people local authorities arrested listed addresses from outside the city.

READ NEXT: Kenosha Police: 60 Percent of Rioters From Out-of-Town >>

Name the towns that these criminals come from. Put the shame where it belongs.

And show pic’s of their faces for everyone to see. Making family proud..NOT!

Name their parents as well. Shame the families that allow these young thugs to run around destroying peoples’ lives.

Defend your selves. They are now calling for a civil war and taking over the white house.

Over our dead bodies! We are not afraid of these snot noses but we want our police by our side!

All of us veterans are still sworn to uphold the US Constitution no matter who is Commander In Chief.

i am veteran from the vietnam era… I took a Oath in 1972 , but being a Oath Keeper you never stop being one… My family will be safe that is the bottom LINE…. PERIOD

What is the name of Obama’s new community organization. And funding from whom? What source ? Definitely, the riots are well organized in all phases of a military operation – transport, communication, supplies, and so forth.

George Soros’ open society, a big supporter of Obama and other Democrats. This man has his mitts into everything. Fed. Government, the Courts, Congress and more. This man is dangerous. His money is like it will never run out. Time to cut off his funds.

John (other)
Reply to  Mary

AND close down ANY and ALL business or mobs, dirty govt officials, ANY thing he is remotely involved in! THEN recind his and his family s citizenship. BAN them like other countries have! We have more than enough trouble makers we are trying to find! WE know where he haunts, STOP him and sons and ALL his investments!