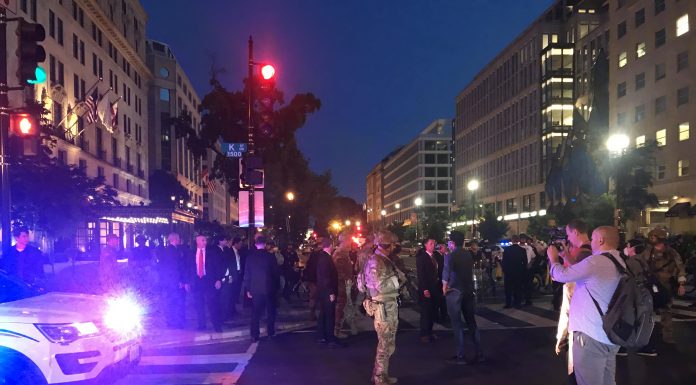 On Monday early evening, while out with a foreign TV news crew covering the D.C. protests, I witnessed a large motorcade of black SUVs with flashing lights approaching the police lines near a quiet intersection a couple of blocks north of the White House. It was clearly not the presidential motorcade. Once they stopped and people began dismounting, it was clear though, that it contained senior Trump officials.

Numerous security personnel in both suits and camouflage were part of the protective detail. Soon several officials exited the vehicles surrounded by others in suits. It quickly became apparent that one of the officials was William Barr, the U.S. Attorney General. As they approached the line of D.C. National Guard troops, and police officers at the intersection, I also saw Secretary of Defense Mark Esper was in the group.

Both Barr and Esper greeted the troops and officers, and remained for several minutes, before departing. The news crew I was escorting was one of the few journalists at this otherwise vacant and quiet intersection, so this did not appear to be any kind of photo op. Instead, it seemed to be a sincere gesture to the men and women on the front lines.

While these troops were D.C. National Guard and not regular U.S. Army, CNN has reported that Secretary Esper may be on shaky ground with the White House after saying Wednesday that he does not support using active-duty troops to quell the large-scale protests across the United States, which President Trump seemed to recently suggest. Esper said those forces should only be used in a law enforcement role as a last resort, and not now (RELATED: Defense Secretary Publicly Opposes Insurrection Act [VIDEO]).

“The option to use active-duty forces in a law enforcement role should only be used as a matter of last resort, and only in the most urgent and dire of situations. We are not in one of those situations now. I do not support invoking the Insurrection Act,” Esper said from the Pentagon podium, according to CNN.

As I have previously noted, the United States has vast numbers of state, local, and federal law enforcement capabilities at its disposal to quell riots and civil disturbances, without the need to take the extreme measure of invoking the Insurrection Act. Let’s hope it doesn’t need to come to that.

Although President Donald Trump won the dispute over complying with congressional subpoenas for his financial records, he wasn't happy that he had to hand...
Read more
Government

Attorneys representing The Satanic Temple are threatening to sue the State of Mississippi if officials follow through on their promise to incorporate the phrase...
Read more