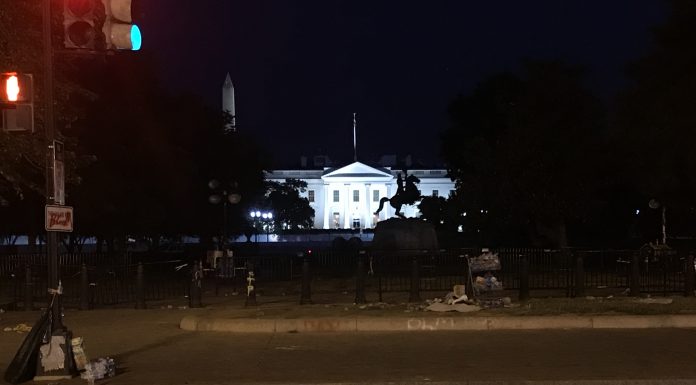 As I reported earlier, Washington, D.C. turned into a small battlefield on Sunday night as anti-police protests turned violent and rioters took the lead, launching fireworks at police and starting numerous fires. Accompanying TV news crews into the center of the action, I noted that most of the rioting and looting occurred within several blocks of the White House, and the ubiquitous graffiti and chants were directed as much against President Trump as the police. (RELATED: Susan Rice Suggests Russia Pushing Violent Riots) 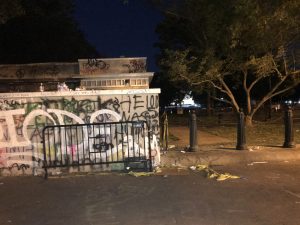 By Monday, the Metropolitan Police Department (MPD) had expanded the perimeter around the White House several blocks north to prevent protesters from using Lafayette Park. D.C. Mayor Bowser also mobilized the D.C. National Guard, deploying military police units near the White House, and made the citywide curfew 7 pm, rather than 11 pm.

These measures effectively ensured that by Monday night any protests were small, sporadic, and limited.

The streets were mostly deserted after 7 pm, and we witnessed MPD roadblocks and riot police, augmented by D.C. National Guard Military Police and riot troops with shields and batons, backed by tan-colored armored Humvees — pushed out at least two blocks from the White House. 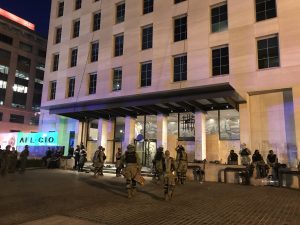 But that wasn’t all. Between Sunday and Monday, in addition to MPD, and D.C. Guard, I noted special police or tactical units from at least five different federal agencies deployed in various ways around the White House.

These federal agencies included the U.S. Park Police, Secret Service Uniformed Division, a camouflaged and armed FBI tactical team (most likely the FBI’s elite Hostage Rescue Team (HRT)) — and a similar team from ATF (Alcohol, Tobacco, and Firearms) — as well as security units from the Department of Homeland Security (DHS).

And then there was the unprecedented display of military helicopters doing low-level flying and hovering over areas near the White House with remaining protesters.

On Monday evening I witnessed several extremely low-level rooftop passes by UH-60 Black Hawk helicopters, with troops sitting in the open side doors, as well as passes by UH-72 Lakota helicopters, including one with medical red cross markings.

It was impossible to determine at the time what agency or agencies, these helicopters belonged to, though the Black Hawks likely belonged to the FBI’s HRT, and were carrying team members similar to those I saw near the White House Sunday night.

As noted by The Drive, “the UH-60 in question has fully equipped operators, replete with suppressed carbines, hanging out of their doors, some of which have four-tube night vision goggles mounted on their helmets.”

Both the D.C. National Guard and the U.S. Army’s 12th Aviation Battalion, have Lakotas, in the air ambulance role, as well as Black Hawks. The Army’s 12th Aviation Battalion is based nearby at Davison Army Airfield in Virginia. However, despite the hype, and President Trump’s ordering U.S. military units into the Capital, it is unlikely these helicopters belonged to active-duty U.S. military units.

What type of active-duty U.S. military units, vehicles, or aircraft we may see in D.C. in the coming days — and what role they may have — is yet to be determined. But we do know that — right now — Trump is deploying national military assets into the National Capital Region (NCR).

In a remarkable turn of events, four members of the United States Supreme Court recently affirmed the constitutionality of state-sponsored religious bigotry. On June...
Read more