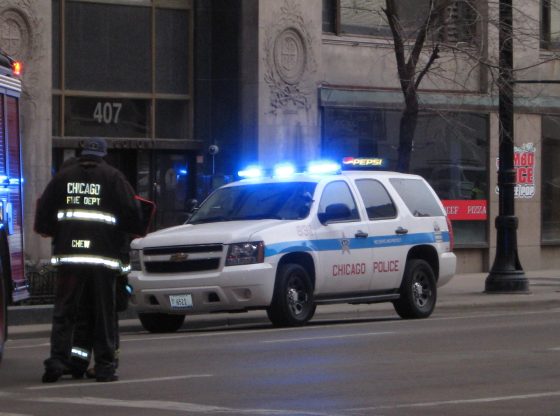 A gang of violent teens is reportedly on the loose in Chicago and is allegedly responsible for a rash of recent random attacks near the downtown core.


CHICAGO (CBS) — Chicago Police on Monday night were warning anyone walking downtown or in the South Loop to stay alert after a series of attacks and robberies.

Investigators have linked those attacks and robberies to a group of teens. They have happened to people who have simply been walking down State Street and Michigan Avenue between Balbo Avenue and the Chicago River.

And it does not matter if you are alone or in a group. Police said the youngsters are attacking and stealing from people at all hours.

On State Street near Van Buren Street, a woman waiting for a bus was surrounded by eight to nine teenagers overnight. They pulled out a BB gun and then beat the woman over the head with the pistol, leaving her hurt on the ground.

Could the dark truth now be that many of America’s most famous streets are now less safe than those we left behind in Afghanistan?

The new ‘scourge’ in Chicago-so rotten and dangerous-they should be thrown off a cliff n see if they can fly.

my neighbor’s aunt makes 62 every hour on the internet.. she has been without work for eight months but the HAC previous month her revenue was 19022 only working on the laptop 5 hours a day.. check this …… 𝐒𝐌𝐀𝐑𝐓𝐏𝐀𝐘𝟏.𝐜𝐨𝐦

Catholics have ‘run ‘ the USA since 1956. President Trump was the first non-CATHOLIC TRAITOR in many years!. Revolt is what CATHOLICS do best. Look at Hitler (CATHOLIC) and what he did ‘for’ Germany. Brown shirts of Hitler were CATHOLIC just like the ANTIFA of Biden. This is the SECOND time Biden (CATHOLIC traitor) has abandoned a nation! The first nation he abandoned was the USA! Biden (CATHOLIC traitor ) deserted the USA on his first day of ‘reign’ to the ILLEGAL ALIEN CATHOLIC INVADERS from the south! Now we have over a million ILLEGAL ALIEN CATHOLIC INVADERS scattered around the USA in less than six months after his ‘reign’. Now he abandoned Afghanistan and so the same story continues! Vote for ANY CATHOLIC and the USA will look the same as everything south of the USA. Ignorant, poverty ridden, no infrastructure, crime ridden, corrupt to the core is what CATHOLIC traitors bring to the USA.

Don’t much care for Catholics, eh? It’s true that the Church has pretty well climbed into bed with Democrats except for abortion. But it is simply not true that the Church runs the country.
Hitler, by the way, wasn’t really Catholic, simply from a
Catholic country – Austria.

Get back on the meds ‘Alfie’!

It’s not just the Evil Catholics now that Americans have to worry about, it’s also now the Muslim Jihadists being lured, invited and paid to come into my country to destroy us; and destroy all White Patriotic Americans.

You are the reason that drugs are illegal. Idiots like you getting spun out on dope and talking like this ruined everything.