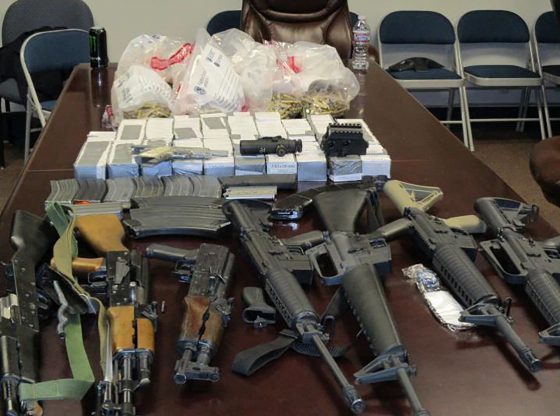 A housekeeper’s tip led police to a cache of weapons and ammo in a hotel room that could have been the location of the next “Las Vegas-style shooting,” when crowds flood the streets for the MLB All-Star game on Tuesday.

On Friday, a maid discovered a rifle in one of the rooms being cleaned at Denver’s luxurious Maven Hotel and reported it to police. A search warrant was executed and by 7:30 p.m. and SWAT teams swarmed the eighth floor to discover sixteen rifles, a thousand rounds of ammunition, and body armor.

The hotel is a block away from Coors Field, where the MLB Midsummer Classic will draw thousands of spectators, and the block of rooms that were involved have balconies facing the field and a high enough vantage point to inflict mass casualties.

Three men and two women were taken into custody on Friday night. According to law enforcement sources, one of the men had gone through a divorce and recently posted on Facebook that he was going to “go out in a big way.”

The three male suspects, Richard Platt, 42, Gabriel Rodriguez, 48, and Ricardo Rodriguez, 44, were all charged with possession of a weapon by a previous offender. The female suspect, Kanoelehua Serikawa, 43, is being investigated for possession of a controlled substance with intent to distribute, as are two of the men.

“The investigation and arrests were the result of a tip from the public, serving as an excellent example of the critical role the community plays in public safety,” Denver police said in a statement. “DPD encourages residents and visitors to always be aware of their surroundings and to report suspicious or illegal activity to police immediately.”

The FBI teamed up with Denver PD, and after a preliminary investigation, they do not believe the evidence is tied to terrorism.

“We have no reason to believe this incident was connected to terrorism or a threat directed at the All-Star Game,” the Denver FBI office said in a statement. “We are not aware of any threat to the All-Star Game events, venues, players, or the community at this time.”

Their initial assessment indicated that the weapons and ammo were tied to an illegal transaction of guns and drugs.

Platt was arraigned on Sunday and a judge set his bail at $50,000 cash. The other three suspects are expected to appear in court on Monday.

REPORT: Democrats in Texas Plotting to Flee State in Order to Scuttle Attempt to Halt Voter Fraud
All The Craziest Videos From the Anti-Communist Protests in Cuba

UMMM !!! they were planning something, BAD PEOPLE GO AWAY for long time and never come back. C-ya HELL,

Once the demonrats realized they were libby snow flake sheep then they withdrew the charges and returned their guns and ammunition and said continue on your way .

I dunno. This does not pass the smell test.

Sounds like a government operation and cover up to me just saying!

I’m sure. So what now? If we are seen with a gun we are up to no good?

No, you also have to be wearing a MAGA Hat, then they’ll cart you off to GITMO.

Or shoot me on site