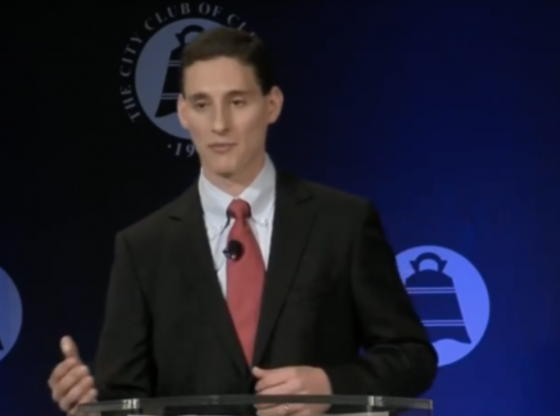 Josh Mandel, a current GOP candidate for Senate in his home state of Ohio, has now revealed one of his main motivators for running for public office: his grandparents who survived the Holocaust.

As Just The News reports:

“My grandparents inspired me both into public service and also in the Marine Corps, he recalled. “My grandfather, Joe, was a Holocaust survivor, survived Auschwitz and multiple other camps — he lost his entire family there — and he was liberated by Allied troops.

“My grandmother, Fernanda, she was an Italian Jew, which was relatively uncommon. There were about 50,000 of them in Italy during World War II. And there was this network of courageous, Christian families that got together to save kids in their community. And so my grandmother was hidden and saved by an incredibly courageous Christian family.

“And at that same time … my grandfather, Harold, from Cleveland, Ohio, was wearing the uniform of our great country of the United States Army Air Corps. And so when I was growing up here in the Cleveland area, it was hammered into me that … I have two debts I have to pay back in this life: one was to this network of incredibly courageous Christian families who made it possible for me to be here today, made it possible for my kids, Gideon, Judah, and Rosie to be here today. And the second debt was to the United States of America and the United States military, brave men who paid the ultimate sacrifice in places like Normandy and Omaha Beach and Iwo Jima and, ultimately, liberated my grandfather, liberated Europe.

“And so my whole life has been lived off of paying back those debts, to this network of courageous Christians and to the U.S. military, and it’s why I joined the Marine Corps. It’s why I’ve served in public service here. It’s why I’m running for the United States Senate. And it’s why I’ve been such a warrior and pointy, tip-of-the-spear leader for religious liberty and religious freedom and the Judeo-Christian values on which America was founded and grew strong.”

Not every candidate running for office can claim the same, one of the many reasons Mandel is strongly positioned to win the soon-to-be vacant Senate seat.

The commiecrats don’t care what the Jews went through. They are too busy whining about slavery

I SECOND THAT MOTION OF SUPPORT FOR JOSH.

We need a lot more candidates like Josh Mandel in the United States Senate. It appears as though he has steel in his spine. I hope that he does not remove his ‘steel backbone’ when he wins and he is in the senate.