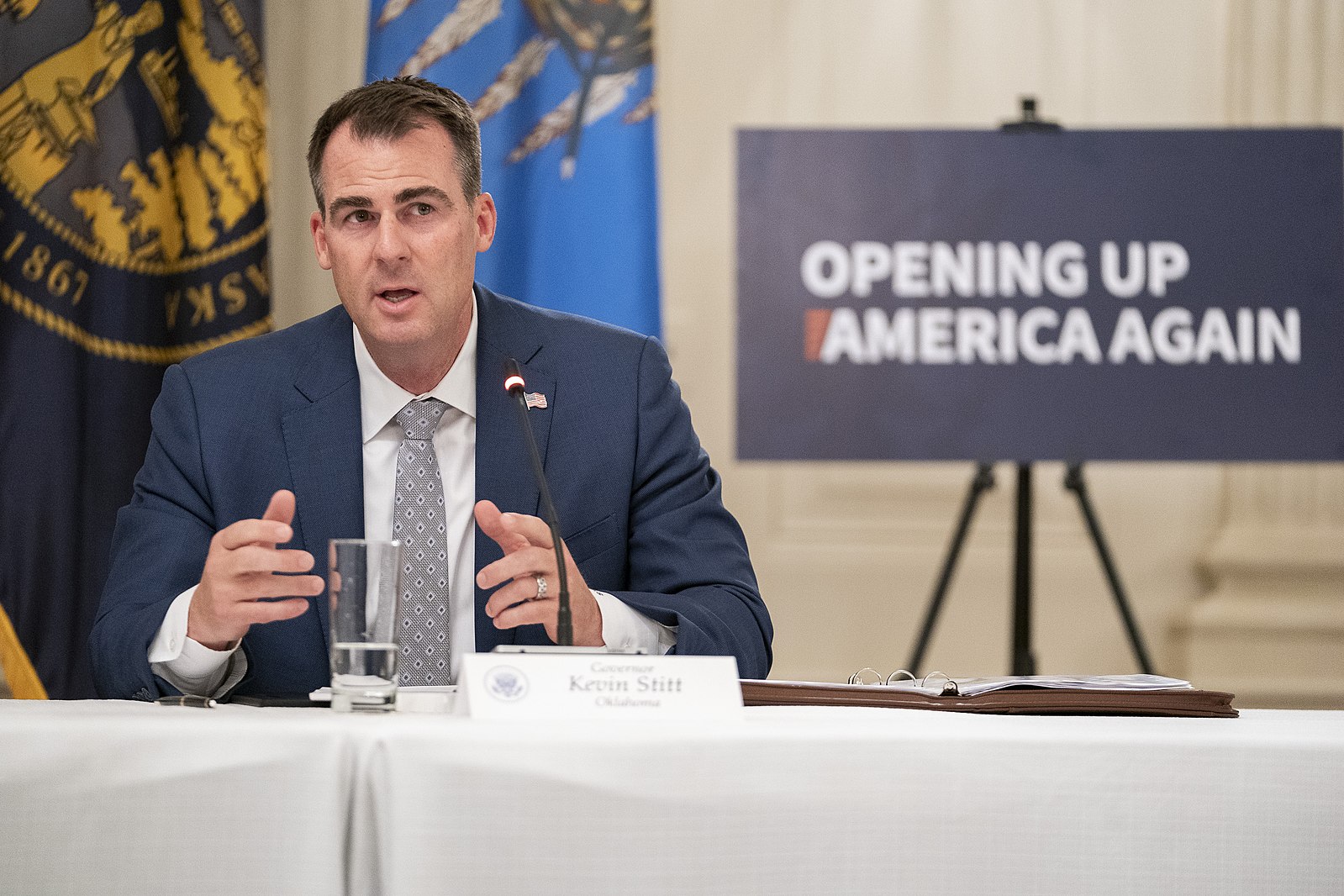 Stitt reportedly has no regrets about not mandating masks for his state’s nearly four million residents. (Daily News)


Stitt, a Republican ally of President Trump, reportedly chaired an official meeting Tuesday with a mask hanging around his neck and pointedly did not wear a mask when he attended the president’s poorly attended rally in Tulsa last month.

“Not thinking about a mask mandate at all,” Stitt told a journalist.

#BREAKING: “Not thinking about a mask mandate at all.” @GovStitt said after announcing he tested positive for #COVID19 pic.twitter.com/IoHSmnd0Ba

Stitt, who found out about his positive test Tuesday night, said he was suffering from fairly mild flu-like symptoms. His wife and children have tested negative.

Oklahoma was initially spared by the pandemic but has been hit hard in the past month as the virus marches through the heartland.

As the virus marches through the heartland. May NOT be happening. Sabateurs at the Florida Dept. of Health put out FAKE 100% possitive results. 98% for Orlando when in reality it was 9.7% and it goes on and on. This is being done to ruin people’s lives and the Economy! Whoever has done this needs to spend a long time in jail. I’m possitive Florida is NOT the only state.

I agree, the “pandemic” is nothing more than fuel for the liberal/socialists/communist/marxists to use against Trump come November. They are telling us citizens they have power over us, hence the shutdown of America’s economic engine and the unemployment of millions of Americans after three years of economic prosperity under the tutelage of President Trump, and the “proclamation” that every American must wear a mask in public and come no closer than six feet, aka “social distancing”. I believe things are nowhere near as bad as the lame stream media continually screams they are!!! That is my opinion!

The claim now is that bunches of people have the virus BECAUSE THEY TESTED POSITIVE when they have NO symptoms. Sounds to me like the same people who claim we have GLOBAL WARMING when our lying eyes tell us that this year is not as hot as usual. Here in North Texas we have had TWO days of 100 or over. And the usual first day would have been July 1. it was not until July 12. So the idiots still believe. I just met one in a doctor’s waiting room. AMAZING. How do they believe in the face of the facts????? Because they WANT to believe.
Covid 19 is so far the 18th worst pandemic on record. And the other 17 did not have a lockdown, in spite of much higher death rates. Folks, it is all about politics and taking America DOWN.

This whole pandemic thing is a political play by the democrats and the NWO. Did anybody notice that a few DEMOCRATS went to CHINA just before the virus hit? Pelosi and a couple of others went to Wuhan.

A. D Roberts
Reply to  Jams

Yes. they were paying for the virus. Just like they paid for the Steele Dossier.

I agree. 6000 doesn’t sound like poorly attended to me. A lot better than the 20 that Biden got. The press continues with it’s onslaught of lies and deception. They are desperate to make their Communist agenda a reality. Only Trump stands in their way. Vote Republican or we are lost.

Especially when you see Biden’s with only 10 to 20 people there and most of those where media.

That was my exact reaction when I read the article…”poorly attended rally?” Sounds like a liberal hack wrote this. If Joe Biden gets 10 people in a room it makes positive news.