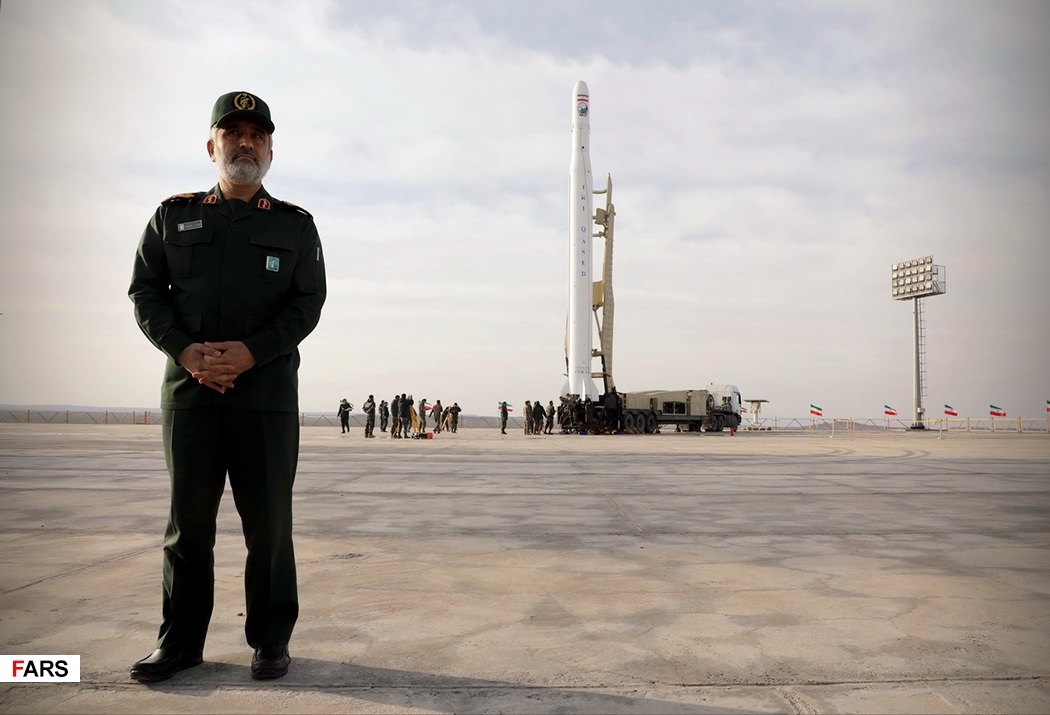 Amidst increasing tensions between the U.S. and Iran, the Iranian Revolutionary Guard Corps (IRGC) launched Iran’s first satellite into space on April 22. The BBC reported that the IRGC stated it would serve both ‘peaceful’ civilian and defense purposes. The head of the US Space Command, General Jay Raymond, tweeted that the Pentagon believes that Iran’s first military satellite does not pose any intelligence threat.


However, as the Times of Israel noted, the threat from Iran’s first satellite launch comes less from the tiny Nour (Light) 3U Cubesat, (essentially three adjoined units less than one pound each), than from the powerful Qased, (Messenger) rocket used to launch it. Experts note this launch has dramatically revealed a secret military space program that could advance its ballistic missile development.

Of concern is that this successful satellite launch was conducted by the IRCG, not Iran’s Ministry of Defense and Armed Forces Logistics – Aerospace Industries Organization (MODAFL-(AIO) which typically manages Iran’s Space Launch Vehicle (SLV) program. IRGC has apparently surpassed MODAFL-AIO as the lead in Iran’s space and missile program – which has repeatedly failed with its Simorgh rocket.

It is also noteworthy that he IRGC described the launch as honoring Brigadier General Hassan Tehrani Moghaddam who was killed – along with top staff – in a massive explosion at Tehran West in 2011 during a rocket fuel test for its Intercontinental Ballistic Missile (ICBM) program. Moghaddam was the commander of the IRCG Research and Self Sufficiency Jihad Organization (RSSJO).

As reported by Time, in February, Iran failed to put into orbit the Zafar communications satellite. It also had two other failed satellite launches last year and a mysterious explosion that destroyed a satellite launch vehicle.

US News reported that the previously unknown three-stage, liquid and solid fueled, rocket was launched from a mobile launcher in Iran’s Central Desert.

According to Fabian Hinz, at the Middlebury Institute of International Studies, “the launch appeared to have happened at a previously unacknowledged Guard base near Shahroud, Iran, some 330 kilometers (205 miles) northeast of Tehran. The base is in Semnan province, which hosts the Imam Khomeini Spaceport from which Iran’s civilian space program operates.”

“Such a system may allow Iran to more quickly fuel a rocket, something crucial in an offensive weapon system,” Hinz added while stressing more information was needed about the launch.

According to the BBC, Iranian state TV footage showed the Qased rocket inscribed with a verse from the Koran that Muslims often recite when going on a journey: “Glory be to Him, who has subjected this to us, and we ourselves were not equal to it.”

The Trump administration has asserted that this launch violates a UN Security Council resolution, which requires Iran not to “undertake any activity related to ballistic missiles designed to be capable of delivering nuclear weapons”. Other U.S. allies also condemned the launch.

Israel’s Foreign Ministry described the launch, in US News, as a “façade for Iran’s continuous development of advanced missile technology.” German Foreign Ministry spokesman Christofer Burger warned that “the Iranian rocket program has a destabilizing effect on the region and is also unacceptable in view of our European security interests.”

Some experts have also questioned China’s potential involvement in Iran’s secret missile program. This concern was highlighted by the recent severe outbreak of the Wuhan Coronavirus (COVID-19) in Iran, specifically among commanders of the IRGC aerospace group, who may have been traveling back and forth from China.

Sounds like they are preparing for their first nuclear missile launch!

Iran’s satellite joins 2 of North Korea’s satellites testing an avenue for a future EMP attack. The approach will be from a southern polar orbit over the Gulf Of Mexico where the US Military is unprepared.

This troubles me far more then covid-19!

Test the laser on it